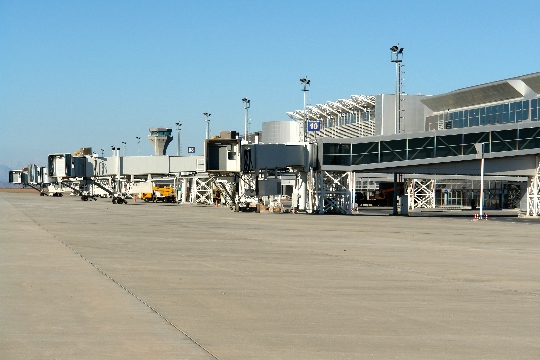 The Republic of Iraq in the Middle East - nottourist destination. Military conflicts and political instability make the country very dangerous to potential travelers. Iraq Airports operate in a limited time and changes in the schedule of flights are possible at any time.
Russian citizens can get to IraqWings Egypt Air via Cairo, Etihad Airways via Abu Dhabi, Pegasus Airlines transplant in Istanbul and Qatar Airways with a connection in Doha. The journey takes around 6 hours.

The international airports in Iraq

Among Iraq's status as international airports have three air harbor:

Transfer of passenger terminals bestcarried out with pre-booked transport from the selected hotel. Independently take a taxi or use public transport in Iraq may not be safe.

Opened in 1979, Iraq Baghdad AirportHe wore before the name of Saddam Hussein. In 2003, he came under the control of the US Army as a result of military operations in Iraq, and in 2004 was returned to the Iraqi government. At the same time the national carrier Iraqi Airways resumed regular flights to the Middle East, and then - in some European capitals, and Asian countries. Today in Iraq the airport in Baghdad regularly landing aircraft of different airlines:

The international airport in Basra, Iraq was put intooperation in the 80-ies of the last century. Gulf War caused the suspension of civilian flights out of this air harbor until 2004. The first flights were resumed only in domestic flights, and Basra to Baghdad route joined the national airline.
The current state of the airport is able to receive aircraft from other countries, and those cooperating with this air harbor companies - Jordan, Turkey, Lebanon and Dubai airline.
The carrier Iraqi Airways performs regular flights from Basra to Amman, Baghdad, Beijing, Dubai, Beirut, Istanbul, Kuala Lumpur and Mashhad.
Boasting especially developed infrastructure this airport Iraq, unfortunately, can not, and passengers who have visited it, there were problems with sanitary conditions and air-conditioning.

Inspection of Gagra area. List of the best viewing points ...