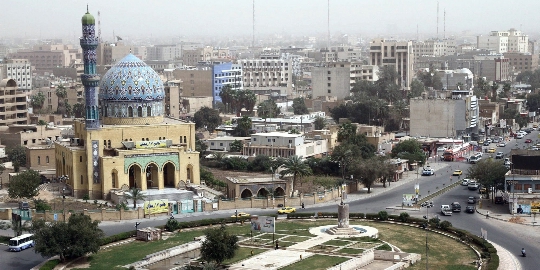 The Republic of Iraq - a state locatedbetween Saudi Arabia and Kuwait. The southeastern part of the country borders the Persian Gulf. As neighboring countries, Iraq boasts large reserves of gas and oil. The capital of Iraq - Baghdad - often at the center of various historical events. Today in the country there are events that do not contribute to the development of the tourism industry. Permanent military conflicts and the existence of terrorism is very effect on the country and the capital's image.

Baghdad - is a huge city with a population ofmore than six million people. Here are concentrated many of the cultural institutions. The capital is located in the heart of the state. The city was founded on the banks of the Tigris River. In these places there is a hot climate with little rainfall. For capital characteristic long summer, which starts in May and ends in October. Because of this climate, Baghdad can not boast of lush vegetation. This is mainly date palms and reeds and canes in the coastal zone.

The first settlement was formed on the site of Baghdadeven in the ninth century BC. the city itself was founded only in 762. Within a few centuries, the city became a center of trade. There was a huge market. Baghdad gradually became the economic center of the entire Middle East.

The fifteenth century was tragic for the city. It was then Tamerlan came here with his army. Baghdad was looted and many buildings destroyed. Later it was conquered by the Ottoman Empire, under the authority of which he stayed until the early nineteenth century. In the 20 years of the twentieth century, there was founded a museum in Iraq, where they began to gather a collection illustrating the history of Assyria and ancient Babylon.

In the early 70's in the capital, a massnationalization. Under the authority of the state has passed everything except the oil producers and refineries. 80s were a difficult period for both the capital and the country as a whole. The state was drawn into the conflict in the Persian Gulf. At the beginning of the 21st century took place in the state of the Iraq war, which led to the overthrow of Saddam Hussein's regime. Despite the fact that the city is gradually recovering, the situation is still tense.