Home>Articles about Iraq>Iraq Flag photo, history, the value of the state flag colors of Iraq

Iraq Flag photo, history, the value of the state flag colors of Iraq 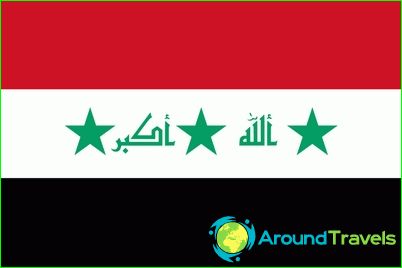 The official state symbol of the Republic of Iraq - its flag - was adopted on 22 January 2008.

Description and proportions of the flag of Iraq

The history of the flag of Iraq

The state of Iraq was created by the League of Nations in 1920year. The first flag of the newly formed country was a tricolor with equal horizontal stripes of black, white and green colors, arranged from top to bottom. Flagstaff flag painted an isosceles triangle, the base to the shaft. Then, the triangle has been transformed into a trapezoid, the pitch of which there were two white stars.

The military coup in 1958 destroyed the monarchy andIraq has become a vertical tricolor flag. The black bar located near the staff, the average white box was on his eight-point star against red and yellow, symbolizing the sun. The third band was made green. Yellow and red colors of the flag represent the Kurds and Assyrians living in Iraq, and the black and green - Arabism, which was a social and political movement, consolidated Arabs in the Middle East.

Another military coup amended theIraq's flag design. He again became a horizontal tricolor, and its average white field there are three green five-pointed stars. Their symbolism is to promote the slogan came to power of the Baath party leaders: freedom, socialism and unity.

Saddam Hussein's regime has adopted a new flag of Iraq. Horizontal tricolor red-white-and-black color had on average an inscription field made the Iraqi leader's handwriting, "Allah Akbar" and three green stars. The flag symbolizes the red field a relentless struggle against the enemies of Islam, and white stripe reminiscent of generosity and nobility of people in the country. The black color on the flag of Iraq meant a great past and served as the mourning for the dead patriots.

In 2008 the Republic of Iraq's parliament voted for the abolition of the old flag. The new state symbol of the country for the first time taken up on February 5 over all government buildings and institutions.