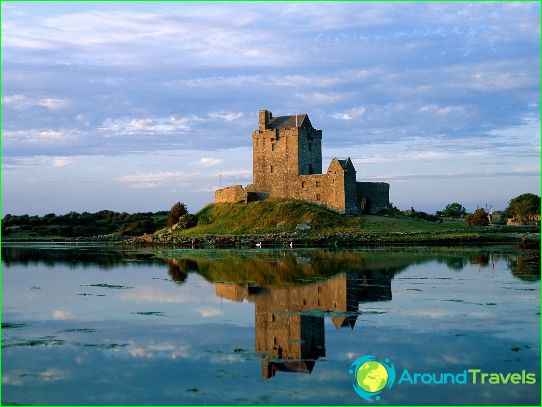 Initially Ireland was made to divide by fiveprovinces of Leinster, Munster, Connacht, Ulster, Meath. Subsequently, the smallest province, Meath, was included in the Leinster as a county. During the "Golden Age" of the province were weakly associated kingdoms, federations, whose boundaries were not clearly defined. Presently Irish provinces have no official legal status, so they can be perceived as commonwealths respective counties.

Leinster - Province, located in the easternof Ireland. The largest city is Dublin, known for rich history and ancient architecture. Dublin attracts tourists with numerous attractions. The most famous place is Dublin Castle, which from the XII century until the 1920s, housed the British administration.

From Dublin, you can go on interesting excursions:

Munster - Province, located in the southern partIreland. If you plan to visit in Munster, Cork noteworthy, ranks second largest in the country. City day is strict and business, but at dusk it becomes the center of nightlife thanks to running clubs and pubs. Be prepared for the fact that the old architecture to see it does not, in fact the oldest building is the Red Abbey, founded in the XIV century, of which only the tower remains.

Connaught is a province,located in the west of Ireland. The attention of tourists deserve two cities: Galway and Sligo. Galway is the gateway to the county, a major port. Sligo is a small town. It is believed that the first settlement appeared here in the beginning of the VI century. Tourist popular Sligo due to the peaceful atmosphere, natural beauty, architectural landmarks.

Ulster is a historic province whichIt combines nine counties, namely Antrim, Armagh, Tyrone, Londonderry, Fermanagh, Monaghan, Donegal, Cavan. Belfast is a big city, which was formed only in the XIX century. Belfast has an industrial past, the present calm.