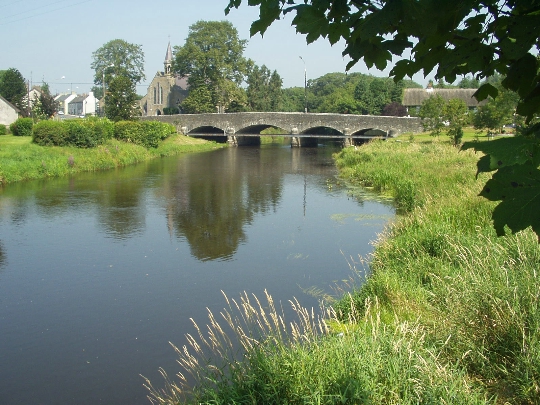 Ireland's rivers form a dense network, periodically punctuated by lakes and swamps. All of them are full-flowing and never covered by ice.

Shannon owns the title of the longest Irishriver. The length of the current 368 kilometers. The bed is a natural border separating the province Connacht (Ireland West) from the eastern and southern parts.

Source Shannon is located in County Cavan (LakeShannon Pot). Initially, the river bed should be in a southerly direction, but in the end the way it turns west and flows into the waters of the Atlantic, forming the estuary, 113 kilometers long. On its way the river passes eleven of the thirty-two counties of Ireland. Along the way, forming a lake - Lough Ree, Lough Derg and Lough Allen. The height at which is the source of the river, is small - only 17 meters above sea level. That is why the river is navigable. It has several gateways that support the desired water level.

Shannon will be interesting for fans to sit with a fishing rod. It is home to salmon and pike.

The river passes through the territory of Ireland, and issecond in length - the total length of 192 kilometers of Barrow. The source of the river - the mountain Slieve Bloom Mountains (land Laois County). The main flow direction - south. Barrow transit flows through Waterford, Kilkenny and Carlow then to connect to the Celtic Sea waters.

Another short river country - totalthe length of the channel just 184 kilometers. The source of the river is located on the hillside Devils Bit (of North Tipperary County). Hence it briskly rushes towards the south to the border of County Waterford. There Shur decides to roll eastward to connect with the "friends" Baro and Nord. And in this line-up they go on their way to the confluence of the flesh in the water Celtic lake.

River Suir, Barrow and Nur locals call the "three sisters." Before entering, they form the estuary.

The total length of the course of 168 kilometers. Traditionally, the source is located in the mountains, but now it Macgillycuddy Reeks (Kerry lands). Initially Blackwater sneaks in an easterly direction, passing Waterford and Cork. After that, the river makes a sharp turn, and goes on a journey to the Celtic Sea waters (southern direction), falling into him near the port Yugal. The waters of the river have chosen habitat and spawning fish of the salmon family.

The source of the river is located in the south-eastern part of thecountry on the mountain Lugnaquilla (land Wicklow County). Slaney passes through three counties - Wicklow, Carlow and Wexford - and ends his short way, mixing with the Irish Sea. Despite its small length, the river crossing the thirty-two road bridges and one railway.

Bolivia Flag photo, history, the value of the state flowers ...