Articles on the Island of St. Helena
by aroundtravels 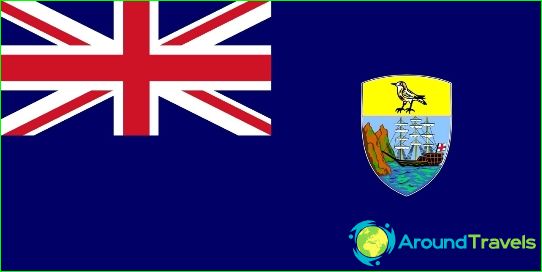 Overseas territory of Saint Helena Island wasIt conquered by the British in 1659. Since then, the island is an overseas possession of the United Kingdom and its flag is a traditional cloth, taken in the colonies and overseas possessions of Her Majesty.

Description and proportions of the flag of Saint Helena

The first flag of Saint Helena wassimilar to the modern panel, unlike which consisted only in a slightly different coat of arms. It was a heraldic shield, on which was depicted a sailboat sailing on the blue sea. At its stern hoisted the white flag with a red cross of St. George. To the left on the arms located peaks, coat of arms was delineated gold piping. This flag is adopted in 1874, and he has successfully existed as a state for over a century. In October 1984, it adopted a new coat of arms and the appearance of the flag of Saint Helena was also changed.