Taxis in Haifa - price, order. How much is a taxi in Haifa 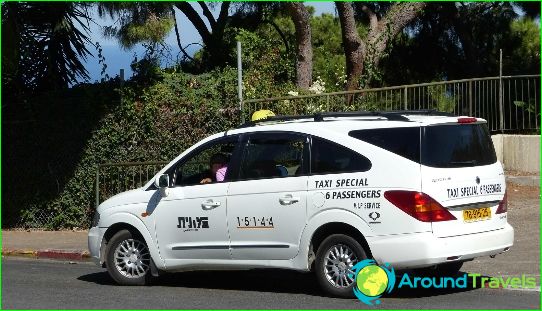 Despite the fact that in some Shabbatholidays transport motion stops, a taxi in Haifa never ceases to work and willing to take you wherever you wish, at any time of the day or night.

Feature taxi in Haifa is that theypresents the white trucks with roof inscription "Taxi", in the cabin - the counter, the price list with the prices and signs with phone numbers, which if necessary can be contacted with the dispatching service.

Stop the taxi, "voted" on the sidelines. You can also ask for you to make an order, contact the administrator of the hotel or restaurant or find a free car at shopping centers, bus stops, close to popular attractions.

Submit a request for the supply of the machine can be turned in the following taxi companies:

The cost of a taxi in Haifa

"How much is a taxi in Haifa?"- An urgent question that arises for many tourists vacationing in the Israeli city. To get the answer to your question, you should review the following information about rates:

If the driver refuses to take you on the counter,threatened him with the police or contact the dispatching service to complain about it. In principle it is possible to agree to go at a bargain price, but before you go, if you do not want to be deceived, it is advisable to find out from local people, but in fact may be worth the trip to the place where you need to get there. Tip: do not pay for travel currency - the fare will be higher, and the driver will surrender at disadvantageous exchange rate for the passenger.

No matter what address you needcome or that you need to visit (many mosques, churches, holy places, or the Bahai Gardens) -on help you come local taxi, which you can quickly and easily navigate not only the city, but also its surroundings.

Currency in Romania: the exchange, importation, money. What ...