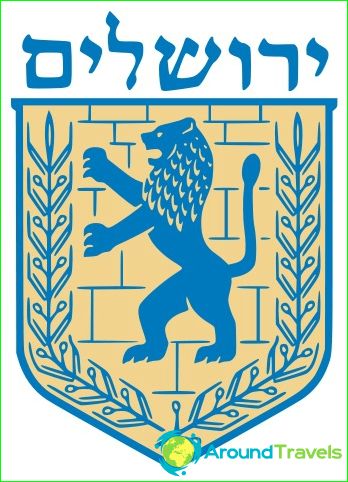 The spurs of the Judean Mountains at an altitude of 650-840 m abovesea ​​level between the Mediterranean and the Dead Sea is one of the oldest cities in the world - Jerusalem. This holy city to the three major Abrahamic religions - Judaism, Christianity and Islam.

Its turbulent history of Jerusalem is totime immemorial and its exact date of foundation is not known. Archaeological research has shown that first settlement existed on the slopes of the Temple Mount as early as the 4th millennium BC. At about the same in the 2nd half of the 3rd millennium BC. on the lands of modern Jerusalem Canaanite Jebusites people they founded the city, mentioned in the Old Testament and the Pentateuch under the name Jebus and Shalem. The existence of the city in the 2nd millennium BC. evidence found during excavations of the unique ancient artifacts and inscriptions (Egyptian proscriptions, Amarna archive, etc.).

According to the biblical narrative, about1000 BC the city was captured by the Israelis, headed by King David, who thoroughly expanded and rebuilt Jerusalem, Hebron became the capital instead of the kingdom of Israel. At the initiative of David in Jerusalem, he was moved the greatest relic of the Israeli people - Ark of the Covenant. The city became the main religious center of the twelve tribes of Israel, so that helped a lot, and soon David's son Solomon built the Temple Mount the first Temple of Jerusalem. After the collapse in 928 BC Israel Jerusalem became the capital of the kingdom of Judah.

At the beginning of the 6th century BC Judah was conquered by Babylon, Jerusalem and completely destroyed. In fact, it had been destroyed and the Temple of Jerusalem. After the second half of the 6th century BC authority on Jewish lands came under the control of the Persian Empire, Cyrus the Great, likely in order to strengthen their political positions issued a decree to permit the return of the Jews to their land and restore the temple in Jerusalem. Although due to the discord between the Jews and Samaritans construction of the temple eventually receded for 15 years, in 516 BC Second Temple in Jerusalem was built. Jerusalem also was restored until the middle of the 5th century BC

Starting from the 4th century BC Jerusalem alternately dominated by Macedonians, Egyptians and Seleucids. By the middle of the 2nd century BC Jews managed to regain his kingdom, but in 63 BC Romans after a three-month siege stormed Jerusalem and the city became the administrative center of the Roman protectorate Judah. A huge contribution to the development and improvement of the Jerusalem period of the Roman era, introduced during his reign of Herod the Great.

In 70 AD Jerusalem was destroyed again. Completely destroyed was the spiritual heart of the Jewish nation - the Second Temple in Jerusalem. Only in 135 AD in place actually razed to the ground in Jerusalem by order of the Emperor Hadrian began to build the Roman city of Aelia Capitolina, access to which was strictly forbidden to the Jews.

After the collapse of the Roman Empire, Jerusalem fallsunder the control of the Byzantine Empire, and gradually becomes a Christian form, as early as the 7th century, after the capture of the city of the Arab Caliph clearly begin to appear Muslim traits thoroughly entrenched in the long reign of the Ottoman Empire in Jerusalem in 1517-1917 gg.

After the First World War by the decisionLeague of Nations Palestine with the administrative center in Jerusalem was under the control of Great Britain, which had a positive impact on long-term undamped Arab-Israeli conflict (in the history of this period is known as Mandatory Palestine). One of the main stumbling blocks in the conflict has always been Jerusalem, which occupies a special place in the religion of both nations, none of which was not ready to concede. By the end of 1948 the city was divided into two parts - East and West, controlled, respectively, by the Arabs and the Jews. In 1980, the united Jerusalem has officially declared the capital of the state of Israel, but never recognized by the international community. Today the sacred status of Jerusalem is still a disputed territory between Israel and Palestine and the subject of the most heated discussions.

Meals in Portugal. Prices for food in ...