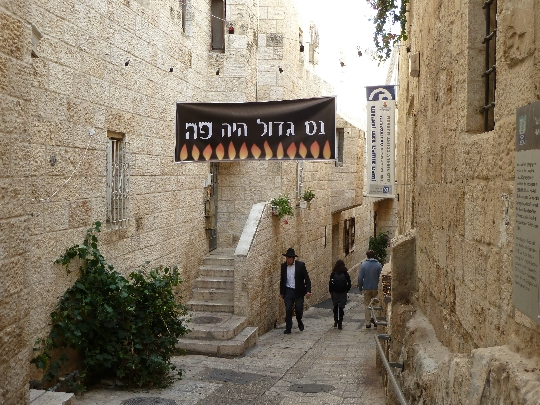 Famous city of the Middle East isJerusalem. Its historical part (the Old City) is a place where there were significant events for many millions of inhabitants of our planet. Here are the religious monuments and shrines. Some of the streets of Jerusalem were formed in ancient times. The Old Town includes Jewish, Christian, Armenian, Muslim part. The main shrine of the Jews considered the Wailing Wall, the Muslims - the Al-Aqsa Mosque, and the Christians - the temple of the Holy Sepulchre and the Way of the Cross.

The main streets of Jerusalem

Attractions are streetJaffa, designed for pedestrians. It is considered the final step for the pilgrims from the port of Jaffa next to the temple of the Holy Sepulchre. At this point, each building has historical value. Vehicles can be moved along the street only at certain times.

The most ancient street outside the old part ofStreet is considered to be prophets. Its beginning - Damascus Gate, the end - Area of ​​David. Street Prophets conventionally separates the secular from religious areas of the city. She appeared in the 19th century and is a beautiful mixture of architectural styles. She placed the administration building, hospital, home secured citizens. It is very attractive for tourists Street of the Prophets.

The main pedestrian area in the modern Jerusalem- Ben Yehuda Street. It is named in honor of the scientist, revived Hebrew. The street was known before 1949 (before the formation of the State of Israel). Ben Yehuda is always full of people who are in a hurry here, to visit the shops and offices.

The oldest quarter of the New Town is consideredShearim. Its construction corresponds to the image of the Jewish areas of Western Europe of the 17th century. On Shearim Street live followers of the orthodox Jewish world.

The oldest part of Jerusalem on a hill Ir David. Location streets formed in the Byzantine period. Quarter of the old city: the Jewish, Christian, Armenian, Muslim.

An interesting museum is the history of JewishQuarter of the Old Town. There are arranged religious schools, synagogues and homes. The first settlements of the quarter there were three thousand years ago. Its central Cardo street different traditional Roman building. It crosses the main thoroughfare of the city. Its modern shape was formed during the reign of Justinian. Along the street there are fragments of the colonnade with the zones for pedestrians. During the period of Arab domination of construction began to crumble. Cardo street trading is considered, since it operates a large number of stores. trading places were built in the times of the Crusaders.

Where better to relax in Croatia. Where to go ...