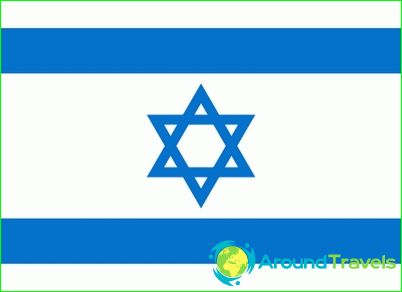 Israeli flag is a white canvascolor with two blue stripes, arranged horizontally above and below the flag. This coloring resembles a prayer shawl ( "Thales"), which is usually used during prayers at religious Jews. White symbolizes purity and hope. In the center of the flag on a white background showing off a blue Star of David. This hexagon symbolizes the magic power. This is the value it even from the ancient people. Jews have such a mark has become popular in the 18th century and was a symbol of sinonistskogo movement. It was the first sign, officially adopted by Congress in 1897 sinonistov.
Star of David form equal triangles,the bases of which are arranged in parallel horizontal stripes flag. Different sources can be found various names hexagon. It is also called the Magen David or Shield of David.
In Israel, the flag as a symbol of the state law was approved October 28, 1948, although an independent state recognized by the 5 months before.
Descriptions Israeli flags were still verylong. At first it was a description, based on the Bible verse. But such interpretations are not officially recognized and, therefore, so far there are disputes about their legitimacy.
The story of the flag of Israel began manyyears ago. Initially, even when there was no state, the Jews there was no state symbols. However, there were cases of the existence of symbols in individual communities. The first flag at Prague Jews appeared in 1254, and looked like a red cloth with a star of David. In 1460 the Jews of Buddha show off his red flag, and 4 stars, two stars were the stars of David.
View of the modern state flag was adoptedafter much deliberation in 1948. The Government of Israel had offered to consider about 170 kinds of flags. With the flag of Israel are linked interesting facts. So, 2003 was marked by the appearance of a white-blue flag in space. It made the first Israeli astronaut Ilan Ramon, lifting it aboard the space shuttle "Columbia".
Canadian astronauts have decided to continue the interestingthe history of the flag of Israel's presence in space, and was sent to the space shuttle "Atlantis". I flew on him a Jew Reisman, who was standing in front of an important task. He was supposed to deliver to the space flag of Israel with the name of the person who first dared to take such a step. So in the space of Israel were a symbol with the name of the first astronaut Ramon.

Children's camps in Estonia in the summer. Children's ...