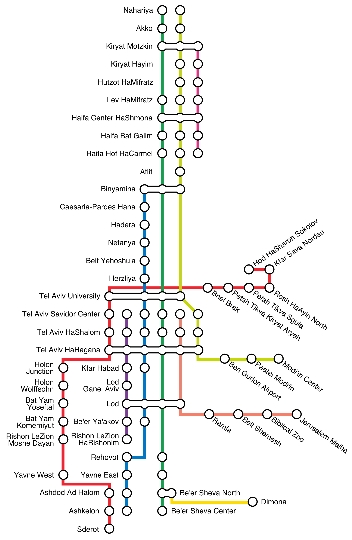 Israel's rail network stretches acrossterritory. Its length is 750 km. It connects the center with the settlements in other areas. Israel Railways operate around the clock, ensuring the smooth movement of passenger and freight trains. Exceptions are religious holidays and Sabbath.

The country has 45 stations for passengers. The main route: Nahariya - Acre - Haifa - Netanya - Hadera - Tel Aviv - Be'er Sheva - Dimona. The number of railway lines has been steadily increasing. Today, the construction of new high-speed lines in many areas.

Brief description of the railway system

The only operator Israel RailwaysRoad is a state-owned company "Rakevet Israel", the activities led by the Minister of Transport. Existing routes pass through the center, northern, southern and coastal regions of the country. In Israel, some parts of the roads are under construction and unused. The center of the whole system - Tel Aviv and Lod junction with the repair depot. On the left-hand drive country applies railways.

The most important means of transportation arefreight trains used to transport loose materials: minerals from the area of ​​the Dead Sea and the Negev desert. Of no less importance is attached to the container and passenger traffic. Around 410 trains a day pass for passenger services.

In the month of railway services IsraelIt uses more than 2 million. man. Most downloaded routes: Ashkelon - Tel-Aviv and Haifa - Tel Aviv. To move trains used diesel locomotives. For passengers are comfortable single-storey and two cars. In some areas of the train reaches a speed of about 160 km / h.

Service Israel trains compliesEuropean level. Passengers are invited to only one class of cars, which is similar to the second class trains in Europe. Customers are guaranteed a comfortable travel and a pleasant service. To pay for the travel tickets are used with magnetic stripe. Timetable of passenger trains is on the site of the Israeli railways - http://www.rail.co.il. Any changes to the schedule fixed on this virtual platform. There are areas where trains are temporarily discontinued. In such cases, passengers can use the free shuttle bus, following the route of the train. These buses depart from the station 10 minutes after the arrival of the composition. Then from the first operating station, passengers continue to move on the train schedule.

Pictures of trains and road maps of Israel Railways