Florence in 1 day: where to go in Florence 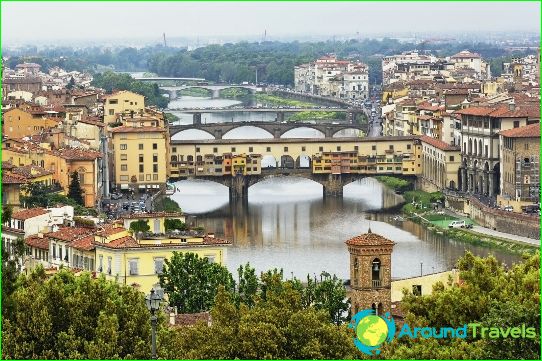 Many tours in Italy include a visitFlorence - the city, who played in the era of the early Renaissance Party principal violin in the Old World. The cultural and financial capital of Europe in one past life, Florence and today is able to charm anyone to set foot on its streets and squares. In this city, a huge number of sites, each of which deserves a separate story, but because Florence for 1 day is able to show only a fraction of its wonders.

The main place where the best focusarchitectural monuments is the Cathedral Square. The majestic temple of Santa Maria del Fiore began to build in the XIV century on the ruins of ancient Roman buildings. The main feature of the cathedral - an octagonal dome, soaring over the walls and built using unique engineering technologies. The facade of the Duomo made of colored marble brought from Carrara and Maremma, and sculptures in the niches it represent to the audience various biblical scenes.
Cathedral of Florence occupies a worthyamong the five most magnificent on the planet. He can visit at the same time 30 thousand people, and the construction is longer than one hundred and fifty meters. One of the most significant components of the Santa Maria del Fiore is the campaign. This elegant bell tower was designed by the famous Italian architect and painter Giotto, whose work served as inspiration for Raphael, Leonardo and Michelangelo.

In search of Botticelli

One of the palaces of Florence, built in the XVIcentury, is known as the Uffizi Gallery. Today it is the most visited art museum in the country. Among the exhibits of the gallery - the most valuable paintings by Botticelli, Titian and Leonardo da Vinci. The exposition consists of works from the collection of the Medici, which for centuries collected members of the well-known oligarch dynasty.

Walking around the city

See Florence in 1 day - and it meansstroll through its famous bridges. The most famous among them - the Ponte Vecchio pedestrian bridge, built in the middle of the XIV century. He gird oneself Arno River just a few steps from the Uffizi Gallery. The former was once a haven for the many butchers, today's Ponte Vecchio - the best patrimony of the Florentine goldsmiths. Shops with gorgeous decorations attract tourists and fans photos here are doing the best panoramic photo of the magnificent Florence.

Holidays in Spain in October: prices and ...