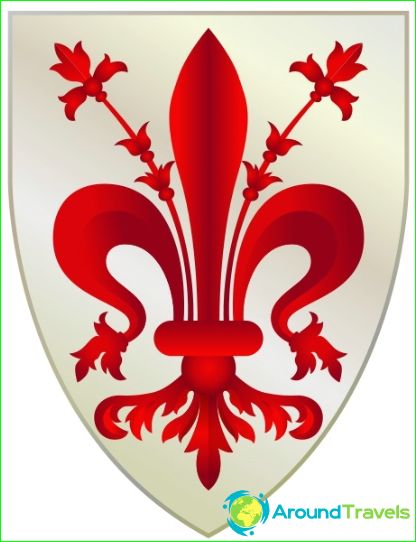 Conveniently located on the picturesque banks of the Arno River Florence, Italy - the administrative center of the region of Tuscany and one of the oldest and most beautiful cities in Europe.

Florence was founded in the 1st century BC Romans as a settlement for Roman army veterans and soldiers in those days was called Florentia, which means "blooming". The city was built on the principle of a military camp, and, like most of the ancient settlements, had a rectangular shape and the grid crossing each other at right angles to the road. The intersection of the main streets of the Roman Cardo and Decumanus Florence was at the place of the modern Republic Square.

Since the city is located on the so-calledVia Cassia road (main road from Rome to the north), and given the fertile valley of the river Arno, Florence grew rapidly and soon became an important trading center. In the 3rd century BC Roman Emperor Diocletian made Florence the capital of the province of Tuscia, and in the 4th century, the city became the seat of a bishop.

In later centuries, Florence was inthe epicenter of the war between the Byzantines and Ostrogoths: the city was in decline, has fallen dramatically and the population. The relative peace was established only with the advent of the 6th century the Lombards. In 774 Florence was conquered by Charlemagne and became part of the Duchy of Tuscany.

This era of prosperity begins for Florencealready in 1000, when Margrave Hugo made the city his residence. From this period dates back to the so-called "Golden Age of Florentine art", which has had a tremendous impact in the future on the development of the whole of European culture. The Tuscan dialect is subsequently formed the basis of the modern Italian language.

In 1115 Florence became the capitalindependent of the Florentine republic, actively built and developed, while continuing to increase its economic power and influence. Soon Florence already holds one of the key positions of the political Olympus of medieval Italy, and its golden florin is one of the most stable European currency.

By the 14th century the economy has reached unprecedented Florencelifting, and the city became a leading center of the Italian Renaissance, having entered into a worldwide story of legendary names such as Dante, Leonardo da Vinci, Petrarch, Michelangelo, Machiavelli, Boccaccio, etc. A huge influence on the cultural flowering of Florence had the Medici dynasty patronizing centuries talented people of his time and led the Florentine Republic in 1434.

In the 18-19 centuries (after a preventive kind of Medici)Florence some time was under the influence of the Austrian crown, and then France. In 1861, as part of Florence in Tuscany it became part of the Kingdom of Italy. From 1865 to 1871 the city was the capital of Italy and has undergone during this period a number of fundamental changes in its architectural appearance. Unfortunately, due to the modernization of the historic center of Florence was destroyed many medieval buildings.

Today, Florence is an important economic,industrial and cultural center of Italy and is in the top 50 recognized as the capital of world fashion. Entertaining centuries-old history and an abundance of cultural, architectural and historical monuments attracts many visitors to Florence from all over the world. Among the most interesting and iconic sights of Florence, which is worth a visit, it is worth noting the Palazzo Vecchio, the Basilica of San Miniato, the Cathedral of Santa Maria del Fiore, and, of course, the Uffizi Gallery, which is considered one of the best art museums in the world.

Rest in Montenegro in November: the prices and ...