Genoa 1 day: where to go in Genoa 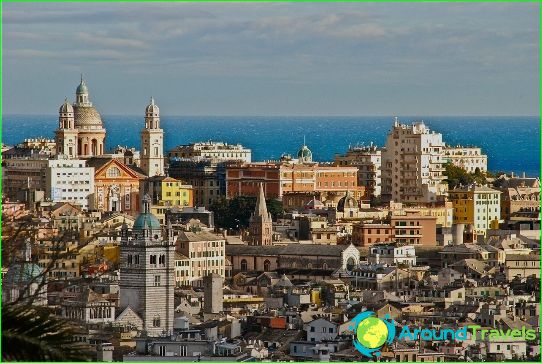 Italian Genoa ranks sixth in Italycount residing therein. At what step of the podium this city is by the number of monuments of architecture, it is unlikely someone will be able to determine. However, instead of having to deal with the statistics, it is better to come and see that even tour "Genova 1 day" will help to know the city from its best side.

On the Ligurian Riviera

Genoa stretches nearly thirty kilometersalong the Ligurian Sea and it is now the largest port of the country. Its economic prosperity began in the XI century, when the Ligurian settlement became a powerful and influential Genoese republic. About time remind the glorious remnants of the city wall, presented Porta-soprano. Since then, the city experienced its ups and downs, and now his heart - Ferrari square is always full of tourists.
She was named for the Duke of names and philanthropist, whose houseLocated near the square. On the Piazza Ferrari are all the most ambitious and important city events, and its main decoration and a symbol of Genoa is considered a fountain built in the first half of the twentieth century. Facades of houses overlooking the square - is the church of Gesu and Palazzo Ducale, Genoa's main theater and the building of the Art Academy.

In Genoa preserved buildings, recognized by UNESCOto the list of World Cultural Heritage. These architectural masterpieces are located in the neighborhood called Palazzi dei Rolli. Its uniqueness lies in the fact that the first quarter was in the Old World examples of centralized urban development, which approves the plan. The limited area of ​​land has forced architects and builders apartment expand upward, but because these streets look particularly unique, given the era of their development - XVI-XVII century.

Meeting the unique sculptures believe CemeterySteel. The plan "Genoa for 1 day" it is possible to include a stroll along its green alleys. This place is considered one of the most beautiful in the world among his own kind, and began to find inspiration Maupassant, Nietzsche, and Mark Twain during his visits to Genoa.
His appearance cemetery became obligedNapoleon velevshemu during the occupation of Italy to make all of burial outside the city. Since then, more than two hundred years have passed, myrtles, oleanders and laurels provide cool shade, and their lush greenery is a perfect backdrop for the magnificent marble sculptures by the best masters of the XIX century.