The suburbs of Rome - pictures, what to see 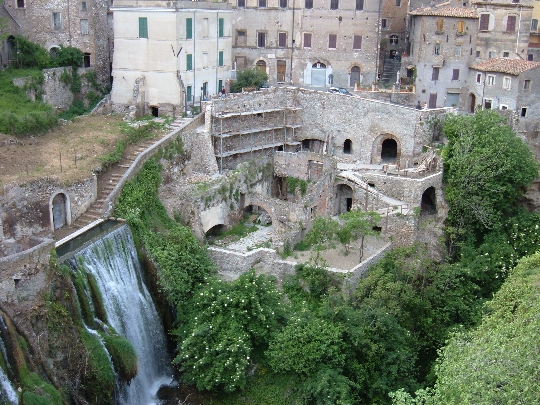 Eternal City - is about Rome. Its history goes back twenty-seven centuries, and in every historical period, Rome was always famous and had a high administrative and political status. His popularity among tourists from all over the world is difficult to compare with someone else other, no wonder the old saying goes, all roads lead it here. In the suburbs of Rome are concentrated many historical and cultural attractions, and therefore experienced travelers will certainly include excursions to the nearby cities in your itinerary.

This suburb of Rome inscribed in the history of architecturepriceless gold. Here at different times have been built villas, which are now considered unique heritage of Roman architects. The most enormous and luxurious - Villa Adriana, occupies a vast valley in the city. Hence the Emperor rule Rome in the II century.
Villa Adrian was built in full compliance with thearchitectural tradition of the era - it is harmoniously blended into the surrounding landscape. Sculptures decorating the premises, famous today for the whole world to its perfect forms, and it is from here originally occur Discus Thrower and the Diana of Versailles.

This suburb of Rome on the north side of the AlbanMountain is famous for its white wines. Local wineries annually produce hundreds of liters unique Frascati, capable to decorate any table or event. The wine is named after the city where built their residences so-called black nobility - nobility of the XVI century, connected by blood with the papacy.
The most interesting architectural attractions of Frascati are of great historical interest:

Castle on the lake

Bracciano Business Card - Castle of the XIII century onpicturesque lake. It was built by the Orsini princes, whose race is renowned in Italy unusually. Representatives of the Orsini family name five times became popes and over thirty times - Cardinals.
The interiors of the castle are not just turned into decorations for shooting famous movies, and some stars even performed in their wedding ceremony.