Home>Articles on Italy>Articles on Venice>The beaches of Venice: photo. The best sandy beaches in Venice (Italy)

The beaches of Venice: photo. The best sandy beaches in Venice (Italy) 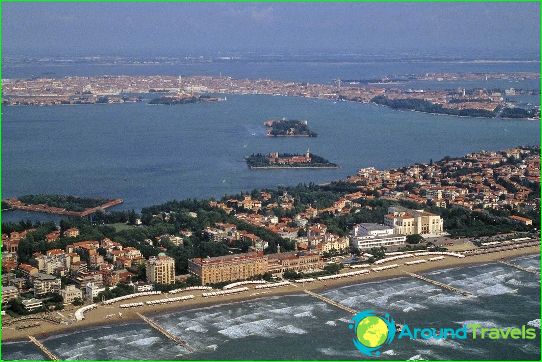 Holidays in Italy - is, first and foremost, sightseeing. After all, the country's history goes back to the Roman Empire. But sometimes it can become a tourist attraction and a city, for example - Venice.

On the one hand, it is difficult to imagine thatcity ​​on the water could do without the beach. It seems nonsense, it is not yet in the whirlwind okunёshsya Venetian everyday life and do not look at the lively streets of Venice. More precisely, not the street, and the channels through which scurry boats and gondolas. Swim in these channels - all the same that leisurely stroll along the busy highway, and then dodging a runaway car. And an abundance of water transport will inevitably entails the appearance of oil and gasoline stains on the surface of the water channels.

It turns out that the sun and the heat, water - inlarge quantities, and nowhere to bathe? This is not quite true. Venice still has its own beach, though - the sea. Lido - a place, which stretched along the Venice beaches. It's a long narrow spit, which was once used only in order to protect the Venetians from attacking enemies. It was only the second half of the XIX century, it puts everything in its place - Lido as though born again, transformed into a very fashionable seaside resort. There rest of Europe celebrities - Shelley, Byron, Goethe and Thomas Mann. Last famous, including the fact that he wrote here his famous novel "Death in Venice".

Despite the fact that the story was a scandal,after 45 years there has appeared the director Luchino Visconti, who decided to stay in Lido final scene of the film of the same name. And today, the beaches of Lido still as popular both with locals and tourists. There are all conditions to be able to get a tan under the warm warm sun, splash in the waters of the Adriatic Sea, in order to "wash" the fatigue of walking tour of Venice. To get to the Lido can be fifteen minutes for the most trivial of Venice transport - speedboat - vaporetto.

Now there are all conditions for leisure. Lido Beach - Venice's best sandy beaches. There are sun loungers and umbrellas, and entry into the water - a very gentle and comfortable. The sea is turquoise then, the azure tint, and the area seems to be a paradise. Exit all - gondolas, canals, sunbeams on the houses, and just have a wonderful sea and sand.

On the Lido is also suggested to call those who lovecinema, to watch one of the films participating Venice Film Festival. This can be done in late August or early September, when there are competitive screenings of films.

The airport in Hurghada: diagram photo. How to get ...