Verona 1 day: where to go in Verona 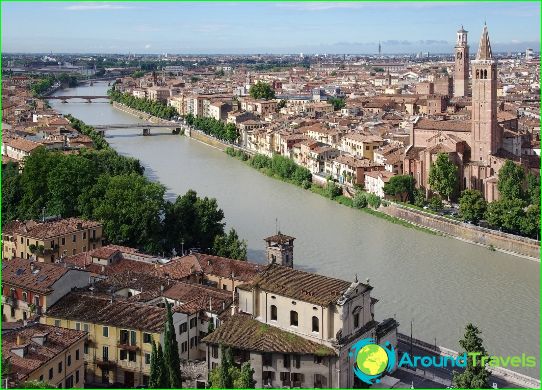 This Italian city is worthy of morelasting love, but also a short walk on it will be enough to make a great impression on its streets and squares. Verona 1 day can give a lot of pleasant emotions, and begin the journey to the best main town square.

Piazza Bra and its heritage

At Piazza Bra are several masterpiecesarchitecture, the oldest of which may well compete with the Roman Coliseum. Arena di Verona - the ancient amphitheater, which appeared in the city at the beginning of a new era. It is well preserved and included in the UNESCO World Heritage List, and a special thanks to the acoustic characteristics of the construction, its arena still held concerts and performances planetary scale.
In the center of the square is divided Square, decoratedMonument to Victor Emmanuel, to unite Italy and the Italian partisans who fell during the Second World War. Facades of buildings in the Piazza Bra - a palace Grand Gvarzhiya XVII century and Palazzo Barbieri, built by local standards "recently" in the XIX century.

From Antiquity to the Middle Ages

Of the buildings in Roman times Verona was successfullypreserved and Gavi Arch. It dates back to the I century and is credited with the authorship of the architect Tserdonu. Arch erected in honor of the most illustrious families in the years Gavia and bridge under it - a remnant of basalt Roman road.
Postoroenny as military defensegates in the I century Porta Bosari remained not so good. Today only the facade of the building can be seen in Verona, which served as a barracks for the Roman garrison stationed here.
Another ancient theater, whose constructionfrom the end of the I century, situated on the slope of a hill of Verona on the banks of the Adige River. He was not just flooded during floods, and later medieval builders and completely filled it with earth and used as a foundation for their buildings.
For romantic Verona in 1 day - and it's balconyJuliet, who tends to visit every couple in love. Juliet's House was built in the XIII century, and its central balcony, according to local legend, served as a meeting place for young Montagues and Capulets. After the publication in 1936 of the film on Shakespeare's play house was restored and made it a museum, but under the balcony began to organize tours for tourists. Of course, no Juliet it never lived, but this fact is neither guides nor their grateful listeners prefer to ignore.

Holidays in Italy in August: prices and ...