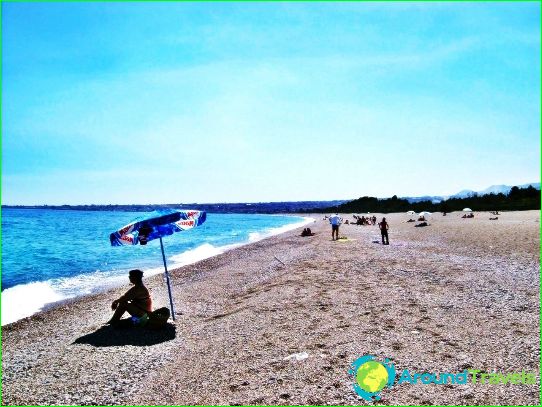 The legendary island of Sicily is famous for itsa paradise for relaxation. The beaches of the famous resort is very diverse. There will be found beaches with white, yellow and black sand, some of them are located close to the rocks. The best beaches in Catania focused in La Playa. The length of the beach of the same name is no less than 18 km away. Ends strip of sand at the foot of Mount Etna, which is almost near the city center.

Beach with unusual mythical past

The rest of the coast is calledCyclops Coast. Not surprisingly, this part of the beach looks gloomy, the entire contiguous area is characterized by a large number of rocks. Over the years, the nature of machined massive stones of solidified lava masses. The result is a quirky here such here and lightly crush the stone monster. While local legend associated with its origin, it sounds much more romantic. And yet not take away from the beach its charm. Adapted for the tourists of the beach has everything you need for a comfortable stay. There are sitting areas furnished with sunbeds and umbrellas, entry into the sea is also very convenient. Soft light sand pleasing to the eye.

There Catania another beach calledLi-Kuti. But he is most loved by locals. Its territory is not as well organized as on the beach of La Playa, there is a good infrastructure. Although it is much more in the coastal zone area. Instead of warm sand is a lot of stones and lava. Sunset in the sea is not very convenient because of coming across sharp stones in the water.

It is not only beaches, located on the territory of Catania. Mention may be made, such as the beaches of Catania:

18 km line from Porto to baths AnjunaIt is known among tourists as a place for a good holiday for a reasonable price. Municipal beach of Catania is quite favorable for a family holiday. The beach is quite nice, sandy.

Paid beach Lido Azurro quite large, wellequipped and at prices quite affordable. Those who wish to look at the wonder of nature and simply enjoy the unusual scenery in the light of the bright sun of Sicily to visit the beaches of black sand. Handed this beauty is 9 km of coastline from Catania to Acireale neighborhoods.