Holidays in Italy in September 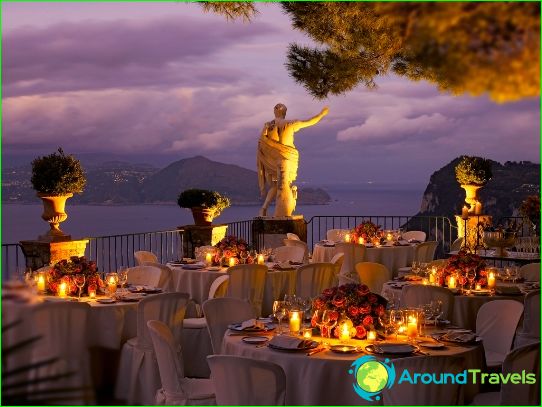 September - month continuation of the holiday seasonItaly. The beginning of autumn is ideal for tourists, because the debilitating heat passes, but the water is still warm. However, it is important to be prepared for the fact that in some regions of the country rains are frequent visitors.

Weather in Italy in September

In Sicily, in September, there may be four or five rainy days. Similar rates are found in Sardinia and resorts. The temperature of the day varies from + 20C to + 28C. The water warms up to 24 degrees.

The resorts of the Gulf of Naples and Naplesthe weather is not so encouraging, as far as we would like. Air day can warm up to 25 degrees and the water temperature is + 23-24 degrees, which is acceptable for swimming. However, we must be prepared for frequent rains, it happens to six rainy days in September.

On the Ligurian Riviera is setcool, rainy weather. The number of rainy days may be seven. During the day the air warms up to 24 degrees, and at night cools down to 17 degrees. The water temperature off the coast is 22 degrees.

In Rome, Italy's capital, the temperature ranges from + 16 ... 26C. In September, may fall 68 millimeters of precipitation.

Festivals in Italy in September

Holidays in Italy in September - this is a unique opportunity to learn Italian culture. So, what events deserve your attention?

Holidays in Mexico in June: prices and ...