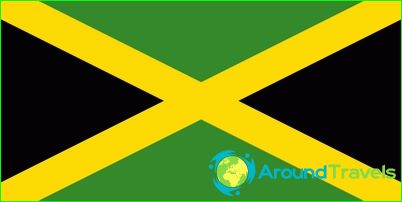 Flag of Jamaica has quite a complex pattern. Its foundation is the golden cross, which is located diagonally across the web. He breaks the flag area into four equal triangles. The upper and the lower triangle is represented in green and the left and right - black. Formal adoption of the country's symbol was the sixth in August 1962. This Jamaican Independence Day from the UK. Jamaica was a British colony.
Black symbolizes the black populationcountry, the spiritual power of the people, creativity, talents and giftedness. Cross gold color symbolizes the sun, which illuminates the generous country with its rays, as well as a variety of natural resources that the country is blessed with. Green indicates the diversity of agricultural production and the development of this area, and it also symbolizes the confidence in the future of the state, its development and prosperity. In general, black, green and yellow are the colors traditionally African continent.
Selecting the flag took place in the framework of the nationalcompetition. The original version was offered with stripes placed horizontally, but it was like a state symbol of Tanganyika. After that we decided to display it on an oblique cross, which is used in the community of nations.
An interesting fact is that in 2005 in the territory ofGermany held elections, unfortunately, they did not give any results. Then the newspapers began to publish frequent Jamaica's flag. It was placed in the media as an example of a possible alliance between the three main German parties. It is black, symbolizing the conservatives, yellow - liberals and green - a symbol of the Ecological Party. Such an alliance called the Jamaica Coalition.
The capital of Jamaica - Kingston. Population of two million, six hundred and forty thousand people. Today, Jamaica is an independent state which is part of the Commonwealth, and is headed by the United Kingdom.
English language - is the state language of the country. The head of state is the Queen of Great Britain, but in the country it is the Governor-General. Parliament consists of the House of Representatives and the Senate. Executive body - the Council of Ministers. This island nation. In eighty percent of the population is Protestant. Seventy-six percent of the residents are African. The climate is tropical, humid and hot.

How to fly from Magnitogorsk to Moscow? Time ...

Food in Colombia. Prices for food in ...