Home>Articles about Kiribati>The flag of Kiribati: photos, history, the value of the state flag colors of Kiribati

The flag of Kiribati: photos, history, the value of the state flag colors of Kiribati

Articles about Kiribati
by aroundtravels 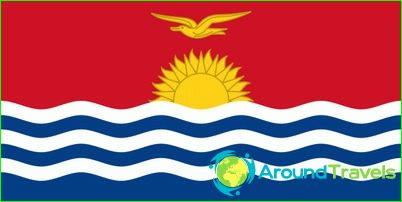 The national flag of the Republic of Kiribati, located in the Pacific Islands was adopted and approved in July 1979, when the country gained independence.

Description and proportions of the flag of Kiribati

The national flag of Kiribati has a classicrectangular and its length greater than the width exactly twice. The upper part of the cloth painted in bright red color, and the lower field is a stylized image of sea waves. Three fine white corrugated strip alternating with three blue, lower wider than the other two. Above the upper white stripe on a red field of the flag shows a rising sun and a frigate bird flying in the direction of the shaft. Sun and frigate applied gold paint.
The colors of the flag are important. Red - a symbol of the sky at dawn, and blue - the waters of the Pacific, in which the state is located. White stripes on the flag of Kiribati indicate the three island groups of the archipelago, and the amount of sunlight - the number of the islands. The sun itself reminds that the island stretched on both sides of the equator, and the frigate bird is a totem of power and free customs of the inhabitants of the republic.
Flag of Kiribati is almost completely repeatsThread State emblem, adopted in the same year. Heraldic shield coat of arms adorns the frigate bird flying over a gold rising sun. The lower part of the shield - a blue and white strip winding, and its main field has a bright red color. Below the shield in the coat of arms of Kiribati is gold ribbon with red lining, on which the country is inscribed the motto: "Health. Peace. Prosperity".
Kiribati flag can be used according to the lawstate for all purposes on land and in water. He raised both individuals and the authorities, he used armed forces and ship owners, as well as the merchant fleet of Kiribati.

As a British colony, Kiribati usedtypical flag, adopted in all the overseas possessions of the European states. It was a blue rectangular flag with inscribed in the upper left quarter of its flag of the United Kingdom. On the right side of the coat of arms of Kiribati flag was placed.
In 1979, Arthur Grimble has developed a new draftthe national flag of Kiribati, in which all the important moments and traditions of the country's population were taken into account. Since then, the flag with the frigate, flying over the rising sun, is one of the main symbols of Kiribati, along with the coat of arms and anthem.

The suburbs of Seoul - photos, what to see