Home>Articles about Kyrgyzstan>Kyrgyzstan Flag photo, history, the value of the state flag colors of Kyrgyzstan

Kyrgyzstan Flag photo, history, the value of the state flag colors of Kyrgyzstan 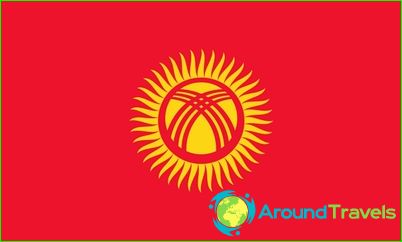 Approved in 1992, the flag of the Kyrgyz Republic is a state symbol of the country.

Description and proportions of the flag of Kyrgyzstan

The rectangular shape of the flag of Kyrgyzstan istraditional for the vast majority of modern flags of the world. The cloth is expressed by the proportion of 5 to width ratio of length: 3. The main field of the Republic of Kyrgyzstan flag - a bright red. In the center of the flag is a sun disk image round shape around which diverging golden rays. Their forty and they are equidistant from each other.
Inside the solar disk plotted symbolicImage Tyundyuk yurt. This device is a grating with a round rim and is intended to cover the traditional dwelling of the Kyrgyz people and divert the smoke from the hearth. Tyundyuk depicted as six intersecting red bands, three on each side.
The diameter of the solar disc refers to the cloth width of 3: 5 and a diameter equal to half Tyundyuk stylized solar disk diameter.

The history of the flag of Kyrgyzstan

Prior to independence in 1992Kyrgyzstan was part of the Soviet Union and was called the Kyrgyz Soviet Socialist Republic. The flag of the republic served as a red flag, which was located in the middle of the horizontal blue bar. Its width was one-third of the flag's width. In the middle of the blue strip is a narrow white stripe, all delivshaya flag in two equal parts. In the upper corner near the staff housed Soviet state symbols - the hammer and sickle and the five-pointed star, yellow sediment.
Authors of the new flag, approved 3March 1992, consisted of five people. Artists have tried to bring to his project several important values ​​for people. The red color of the flag of Kyrgyzstan represents the valor and courage of the best sons of the country. Such was the flag of Manas - the hero of the epic drevnekirgizskogo, united country. The sun symbolizes the wealth and peace. Tyundyuk traditional yurt - a symbol of his father's house, which is the land of Kyrgyzstan for its every citizen. Forty sunlight reminiscent of the tribes that inhabited the old days the Kyrgyz land and united into a single state.
In 2011, one of the deputies of the ParliamentI made a proposal to change the appearance of the state flag of Kyrgyzstan. In his view, reflected in its tyundyuk strongly distorted and untrue character. The question is still open, and today's Kyrgyzstan flag - acting.

Flag of Australia: photos, history, the value of the state flowers ...