The population of Kyrgyzstan 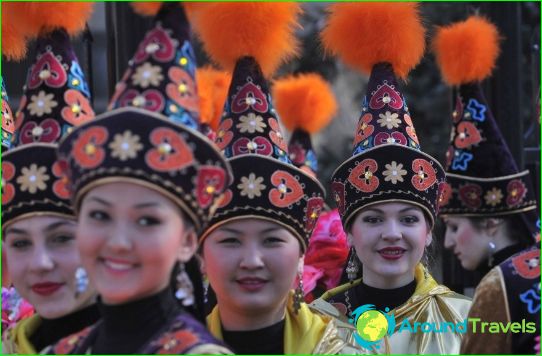 Kyrgyzstan has a population of over 5 million people.

The national structure of Kyrgyzstan is represented by:

60% of the population live in rural areas (especially in Uzbek and Kyrgyz). Russian mostly live in the cities, and the Uzbeks - in Osh oblast.

The official language is Kyrgyz, but widespread is Russian and Uzbek languages.

Despite the fact that Kyrgyzstan is quite well developed network of medical institutions, in which there is a shortage of disposable instruments and certain medications.

Before heading to Kyrgyzstan should do preventive vaccination against rabies, polio, hepatitis B and C, typhoid and cholera.

Traditions and customs of the inhabitants of Kyrgyzstan

Kyrgyz families, usually large, becauselive together several generations of relatives. The family decided to respect their elders and obey the head of the family. Also, in Kyrgyzstan developed mutual neighbor - if necessary, a family in need of assistance, always provide support as relatives and neighbors.

Kirghiz - hospitable people: If you are invited to visit - do not give up. As a rule, guests are greeted at the gate of the Kirghiz - they greeted and invited to come to the house. At the table is appropriate to ask well-being of family members and their affairs. As a gift for the owners of the house, you can take with them small gifts, and for children - sweets. It is not surprising that the beginning and the end of the meal will be accompanied by tea party - this is a national feature of Kirghiz (pours tea master of the house).

In the life of Kyrgyz special rolenational entertainment, namely, the various ethno-games and competitions. The most popular games are the equestrian events and Ulak-tartysh (fighting horsemen for a goat carcass). Young people like to play a romantic game Kiz-Kuumai ( "catch the girl"), the essence of which is as follows: man, riding a horse, has to catch up to her and kiss her. As a rule, play on the big holidays in ethno-games, and a large number of people taking part in them.

If you are thinking for a walk during a visit to Kyrgyzstan, always keep your passport with you, as the local police often stopped travelers to check documents.