Riga 2 days: where to go in Riga 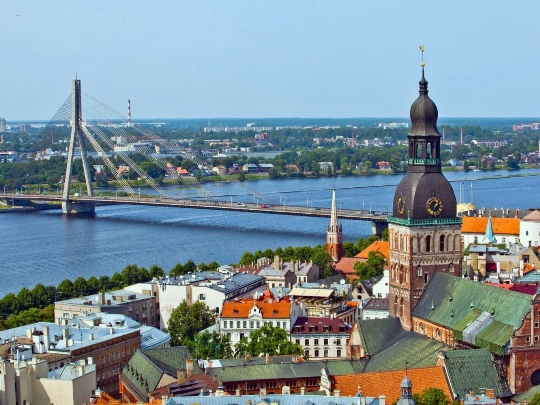 Member of the World Heritage list of suchinfluential organizations like UNESCO and the holder of the title of one of the cultural capitals of the Old World - the capital of Latvia. These circumstances are already a convincing argument in favor of the operation "Riga 2 days."

On the cobbled streets ...

Old Town - is the Duomo and the Church of St.Peter, the Powder Tower and Great Guild Hall, House of the Blackheads, and just cozy streets that are paved with stone blocks and remind us that the city was born many centuries ago.
One of the old residents of Riga - the Cathedral of St. James. It was erected in the first third of the XIII century, and in his appearance, in spite of the obvious features of Romanesque architecture already guessed early Gothic. Alarm bell of the temple has a long "bad" story. He called once to look at the public executions in the Town Hall Square, and therefore it is called a bell sinners.
Riga 2 days - this is the famous Powder Tower,defending the XIII century entrance to the old town. Then it was stored reserves of gunpowder and the purpose of storage gave the name of the majestic fortifications. Today, the Powder Tower you can see the exhibition of the Military Museum in Riga.

In Riga, there are so many amazingbuildings with unique not only architecture, but also history. For example, a house with black cats, built on an injured Guild merchant. The Germans did not want to make Latvian the organization. For this, he built a house made famous, and its turrets ordered set figurines of cats who proudly raised their tails toward the Guild. The scandal has become a part of history, and the cats were left in place, turning toward the offender has satisfied the muzzle.
The unanimity in the belief comes through in the facadesMinor buildings on Castle Street. Called "Three brothers", three houses arouse admiration guests of Riga with its unusual contours. They stand, huddled close to each other in their construction dates back to the XV - XVII centuries and houses are considered as one of the business cards of the Latvian capital.

Once in Riga for 2 days, inveterate theatergoerstake the opportunity to visit the local opera. The theater building was built in the second half of the XIX century, and the first production on its stage became "The Flying Dutchman". The scene of the Riga Opera heard many famous singers and modern repertoire allows you to select a play on the soul and the fans of classic and modern style followers.