The streets of Daugavpils 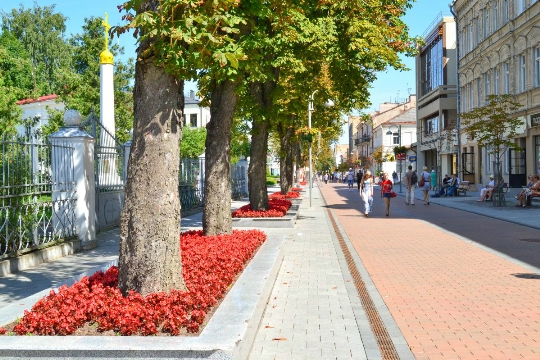 Daugavpils is the second largest cityLatvia. His story began a long time ago, in documents written about him since 1275 Today the main streets of Daugavpils reconstructed. Daugavpils had different names. It was designated as Dinaburg, Dvinsk, Borisoglebsk and others. The city belonged to the Lithuanians, Russian, Poles. The mixing of cultures and histories identify the specific atmosphere of Daugavpils.

Large-scale works are carried out in the city center, on theRigas street. The street received its designation in honor of the country's capital. Architectural attractions located here, are a confirmation of various historical events. Earlier in the Riga business and commercial life of Daugavpils was concentrated. In Riga there are many beautiful buildings built in the last century. Locals call it Broadway. Riga Street covered with beautiful stone blocks. Buildings in this part of the city was carried out in the early 19th century. Therefore, an interesting story is every building on Riga. In Daugavpils dominated House of red brick.

The city retained a large number ofwooden buildings. Houses that are relevant to the wooden building of the 19th century, can be seen in the following neighborhoods: Old Forshtadt, Mane, Old Slings, Old Pohulyanka.

City at different times was part of Livonia,Polish-Lithuanian Commonwealth, the Russian Empire. He has always been a major transportation hub and trading center. After World War II the city was considered the regional center of Latvia. Its historic part of town planning recognized monument.

Landmark dam is considered thatIt has a height of about 9 m and a length of approximately 6 km. It was built near the Daugava River in order to protect the village from flooding. The pearl of the city - the old fortress, is recognized among the largest European castles. It refers to the beginning of the 19th century and is famous architectural monument.

In the historical center with buildings in Latgale baroque. The facades of buildings are made of red bricks and different original forms.

If you go along the street Rigas, you can seethe most significant architectural buildings of Daugavpils. It is located 80 historic buildings. In the last century, this street was considered pedestrian. In the center of a park created by the mayor P. Dubrovin. The park is named after its founder and is a popular holiday destination. Recreational Area of ​​Daugavpils is located in the north-eastern region.

Between streets Saules and Riga is the Unity House, where there are shops, bank, cafe and library.

We say "mountains" - mean the "skiing"

The airport in Agadir: diagram photo. How to get ...