The best restaurants in Vilnius 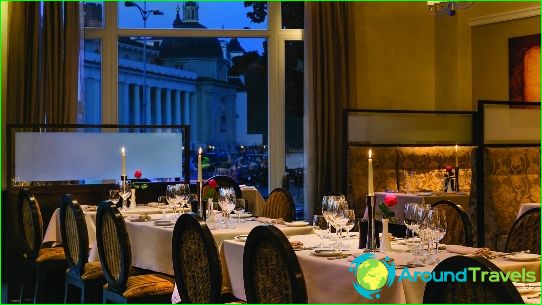 The most popular dish in the Lithuanian capital, andin all the cities and towns - dumplings, pies potato stuffed with meat. This dish, in fact, there was not so long ago, but many tourists feel that it is always prepared. The best restaurants in Vilnius can not do without it, so in the menu, it will fail, with different fillings and sauces.

Going on a gastronomic tour of Lithuania and itsthe capital, the tourist must be ready not only to dishes from grated potatoes. Ethnic cuisine uses simple products and simple recipes. At the same time local chefs using little secrets turn them into a true culinary masterpieces, which is not ashamed to apply and to the royal table.

In addition to the most popular Zeppelin, the menusure to be a cold beet soup. I wonder what is believed to friedge boiled potatoes, but it should always be hot and submitted on a separate plate. Also popular in restaurants are potato sausage, potato casserole, and, in general, this product is borrowed from the American Indians, is found in every second Lithuanian dish.

As a child, many have been taught to eat at the table and notspeak. In the modern Vilnius has an amazing «Šnekutis» restaurant, whose name means "talker". Those who dared to create such an institution are well aware how important a good company during the meal. There is always a lot of people, both locals and visitors of Vilnius, which surprised quite simple interior, reminiscent of a rustic house with underground elements. The most important thing - here are prepared with love, and the same dumplings and sausages, and tasty ice-cold beer.

Another national cuisine restaurant - GrafZeppelin. From the name exactly clear who takes the main position in the menu. It is known that the shape of the famous Lithuanian pies reminds invention of Count Zeppelin, and the name is also named after him.

Therefore, the emergence of food places withcalled anyone in the capital were not surprised. But pleasantly surprised by a homely atmosphere, in this restaurant you can have lunch or dinner with family friends, listen to soft music and truly escape from the city.

So, travel to Lithuania is expected to be extremelyinteresting. Old Vilnius surprise guests an abundance of churches, churches, old buildings. After sightseeing a pleasure to sit down at a table of street cafe or go to one of the restaurants, order a couple of zeppelins and reflect on the meaning of life and what they saw.