History of Vilnius. The base development, occurrence of Vilnius 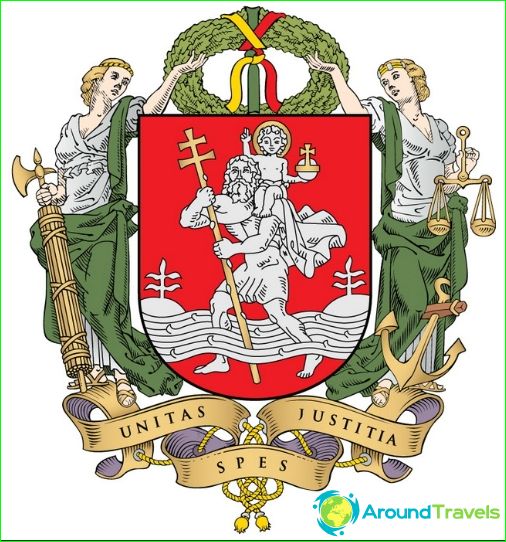 Coat of arms of Vilnius

Vilnius - the capital, as well as economic andLithuanian cultural center. This incredibly beautiful and green city located in the south-eastern part of the country at the confluence of the Vilnia river Vilija (Neris Neris). Many historians and linguists believe that it is "Vilnia" and gave the city its name.

The settlements in these lands existed inthe prehistoric period, but the exact date of the founding of the modern city of reliably known. The first written mention of the town meet in the Lithuanian Grand Duke Gediminas and the letters are dated 1323 year. In Vilnius documents already referred to as the "capital city" of the Grand Duchy of Lithuania. That Duke Gediminas and is revered as the founder of Vilnius Lithuanians.

In the following decades thanks to Gediminaswars, strategic alliances and marriages has significantly expanded the possession of his principality. Vilnius (or as it was called the city of Vilna) remained the capital and main residence of the Duke and prospered. In 1385 the grandson of Gediminas Jagiello as a result of signing Krevsk Union (dynastic union between the Grand Duchy of Lithuania and Kingdom of Poland prior to the establishment in 1569 of a single federal state of the Commonwealth) was the King of Poland. In 1387 Jogaila granted Magdeburg rights to Vilnius.

At the beginning of the 16th century, the city grew aroundmassive defensive walls. In 1544 a well-fortified and prosperous Vilnius was chosen King of Poland and Duke of Lithuania Sigismund I as his residence. Active development and the establishment of Vilnius as an important cultural and scientific center was stimulated by the base in the city of Stefan Batory in 1579 and the Academy of the University of Vilnius Society of Jesuits (now Vilnius University).

The 17th century brought the town a number of setbacks. During the Russian-Polish War (1654-1667) Vilnius was occupied by Russian troops, and as a result looted and burned, and destroyed much of the population. During the Northern War the city suffered substantially from the Swedes. Do not spare the city and the outbreak of bubonic plague in 1710, and the subsequent numerous fires.

By the end of the 18th century after the last of the thirdpartition of Poland, in which she actually ceased to exist, Vilnius became part of the Russian Empire and became the capital of the province of Vilna. During this period, the city walls were almost completely destroyed with the exception of so-called "Dawn" - the only preserved to the present time the city gate to the chapel. The chapel is still kept the miraculous image of Our Lady of Mercy (a rare type of icons depicting the Virgin Mary without baby in her arms) - one of the main Lithuanian Christian shrines.

In the summer of 1812 in the course of the war between the RussianEmpire and Napoleonic France Vilnius took Napoleon's troops, but suffered a crushing defeat, pretty soon were forced to leave it. Hope city on possible independence from the Russian Empire did not materialize, and in 1830 resulted in the liberation movement, the main slogan of which was "the restoration of the independence of the Commonwealth." As a result of the rebellion was suppressed, Vilnius University closed and the residents of the city were subjected to mass repression. Brutally it was suppressed and civil unrest in 1861 and 1863 that led to the imprisonment of a number of residents of Vilnius rights and freedoms, as well as the ban on the use of the Polish and Lithuanian languages. Nevertheless, by the end of the 19th century Vilnius became the cultural and political center of the revival of the Lithuanian nation. the first newspaper in the Lithuanian language "Vilniaus žinios" In 1904, the ban was lifted in the Lithuanian press, and the city came out. In 1905, the Great Seimas of Vilnius was held that approved the memorandum Russian Council of Ministers demanding autonomy of Lithuania and became, perhaps, one of the most important stages in the formation of the modern Lithuanian nation and the restoration of Lithuanian statehood.

In 1915-1918 during the First World WarVilnius was occupied by the German army. February 16, 1918 in Vilnius, Lithuania signed the Act of independence. And although the official publication of the act was banned by the German authorities, the text of the resolution was published and distributed clandestinely. The document was an exceptional value and formulated the basic principles of government, and also served as the legal basis for the restoration of Lithuania's independence in 1990. After the withdrawal of German troops in the city for some time was under the control of the Poles, and then was occupied by the Red Army. In July of 1920 between Lithuania and Soviet Russia signed a treaty that guaranteed the sovereignty of Lithuania, which included and Vilnius region, headed by Vilnius. A few months later, Poland and Lithuania signed an agreement Suwalki, according to which the Vilnius region was assigned to Lithuania. However, Poland is actually and immediately broke the treaty, occupied Vilnius, which later became the administrative center of Vilnius province and existed as such until 1939.

In September 1939, Soviet troops occupied Vilnius,and in October it signed a "Treaty of Mutual Assistance" and Vilnius officially moved to Lithuania. Nevertheless, already it became part of the USSR, and Vilnius became the capital of the Lithuanian SSR in August 1940 in Lithuania a series of clever political manipulation. In June 1941, Vilnius was occupied by the Germans and liberated by the forces of the Soviet army only in July 1944.

Finally it managed to restore its independence Lithuania only in 1991. Vilnius became the capital of the newly independent state of Lithuania.