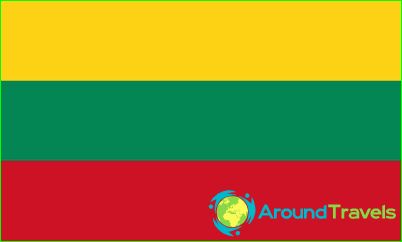 National flag of Lithuania is a statea symbol of the Republic of Lithuania (Lietuvos Respublika) and represents the panel of a rectangular shape with an aspect ratio of 3: 5, which consists of three equal horizontal stripes: the upper stripe is painted in a dark yellow color, middle band - in dark green, the bottom bar - red.

Background to the creation of modern Lithuanian national flag is as follows:
In 1917 in Lithuania startedrevival of statehood. It was the question of the national flag. Proposal to approve the stamp flag, which is now the State Historical flag of Lithuania (on a red ground on both sides of a horseman in armor with flowers Lithuanian State Emblem), as a national, not supported in mind the difficulties of manufacturing of this flag. To make a truly national flag we decided to take as the basis of color, predominant in traditional Lithuanian fabrics. So the artist Antanas Žmuidzinavičius came up with two-tone green and red flag. But the delegates of the Lithuanian Conference held in September 1917 and elected the Board of Lithuania, this option flag is not approved as a flag seemed to them pessimistic. The newly created Commission on the flag design proposed to approve the flag of Lithuania Minor (the name of the historical region), which is a horizontal tricolor of equal stripes of green, white and red colors. But this version of the flag was rejected as "Protestant." Alternatively, the Commission has proposed to add to the two-tone green and red flag yellow color is the color of Catholicism. But a narrow yellow stripe in the middle of a two-color flag, which was supposed to symbolize the rise, and has not been approved. In the end, after lengthy discussions, 19 April 1918, the Commission decided that the Lithuanian national flag is the tricolor of green-yellow-red. A 25 April 1918 the Lithuanian Council unanimously approved this option, as the Lithuanian national flag.

The same flag as exists in the presenttime, the only thing that has changed since then is the ratio of the flag of the parties, it was originally 2: red, first used a very dark shade of red (close to purple) 5, as well as the shade, but now is used more light: 3 and is now 3 tone.

Officially the flag colors were interpreted as followsway: yellow - the sun, light and prosperity; green - grass, natural beauty, freedom and hope; Red - earth, the courage and the blood of heroes, sprinkled his native land. Simple Lithuanians new flag fell on the soul. Yellow color are identified not only from the sun but also the color of honey, ripe ears, girlish hair, fresh wood and gold. Spontaneously developed original, folk legend, which described the flag as follows: from the red earth grows green grass and mature in yellow spike.

In the Constitutions of 1922 and 1928 yearsyellow-green-red tricolor was named the state. Despite all attempts to change the intelligentsia favorite people flag it in the Constitution of 1938 remained unchanged and was already correctly recorded as Lithuania's national flag. July 30, 1940 the Lithuanian tricolor flag was abolished by the decree of Minister of Internal Affairs of the Lithuanian SSR. Only with the beginning of the restructuring was made possible formal revival of the national tri-color flag of Lithuania. October 7, 1988 at 10 am, after many decades of oblivion again tricolor was hoisted on the tower in Vilnius Gediminas Castle top, it became a symbol of the spiritual liberation of the Lithuanians. Since then and until now the green-yellow-red tricolor is the national flag of Lithuania.