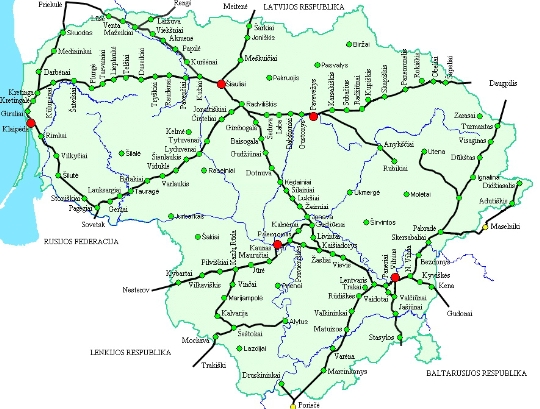 The railway network is of great importance forthe country's economy. Lithuanian trains annually carry a huge number of passengers and more than 50 mln. Tons of cargo. The most important goods are considered oil transported from Russia to Lithuania ports. Through the territory of the country is followed by international long-distance trains, which go from Vilnius to St. Petersburg and Moscow.

The main road of international scopeIt passes from Ken - Vilnius - Kybartai. Lithuanian railways network is extensive. It is considered the center of Vilnius. The country supports the rail connection with Prague, Budapest, Berlin, Sofia and other cities.

On certain routes, trains arethe most convenient, fast and comfortable means of transport. For example, when traveling from Vilnius to Klaipeda, Siauliai. At close distances more favorable to travel by bus than by train.

A monopoly on iron Lithuanian road actsJSC "Lithuanian Railways". The enterprise has the following divisions: passenger transport, cargo transportation and infrastructure. More than 91% of the turnover falls on the share of rail transport. Lithuania rails connected with Belarus and Latvia. Within these countries the goods are carried in other CIS states. Through Kaliningrad trains run in Germany and Poland. The most important for foreign economic relations is considered highway Moscow - Minsk - Kaliningrad, which connects Lithuania and Russia.

Train passengers ply significantintervals. movement speed has been reduced in recent years. The cars are created comfortable conditions for passengers. In Lithuania, there is an express train, where there are soft couches, which are transformed into beds. In other trains provided wooden benches. The level of comfort there corresponds a proprietary CIS trains. Domestic shuttle trains with two-story cars euro class. Lithuanian train moved slowly, but right on schedule.

Travel by train is cheap. The site operator "Lithuanian Railways» - litrail.lt, represented routes and ticket prices. There you can get information about the availability of seats on the train, as well as find out about discounts. passenger receives a 15% discount when ordering a direct and return ticket. Tickets can be purchased at the station ticket offices, on the Internet or at the train conductor.