The population of Lithuania 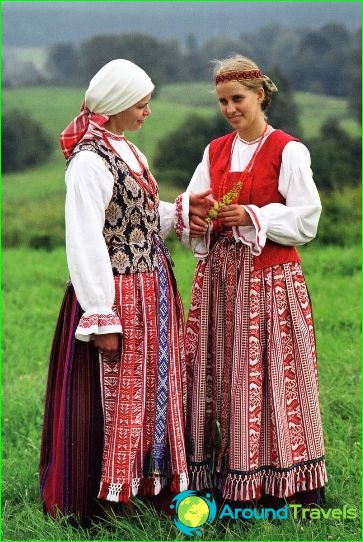 Lithuania's population is more than 3 million people (an average of 1 sq km is home to 50 people).

On the territory of Lithuania it was found the oldest traces of human habitation belonging to the Neolithic and Mesolithic: there were discovered the means of production, made of horn, bone and silicon.

The ancestors of the Lithuanians were Aistė (Balts) - they startedlive on the Baltic coast from the beginning of the II millennium BC Then, over time, the Balts were divided into tribes such as the Cours, Prussians, Semigallians, Aukstaitija (a big role in the formation of the Lithuanian nation and played tribes Aukštaitija Samogitians).

Ethnic composition of Lithuania is represented by:

The state language - Lithuanian, and have widespread Russian and Polish.

Lithuania is characterized by a high level of performancemortality (the country is the leader in the number of deaths from coronary heart disease). According to studies, the Lithuanians less than all of Europe concerned about a healthy lifestyle (they have a lot of bad habits).

The traditions and customs of the people of Lithuania

Permanent life partner Lithuanians - Song: very popular in the country enjoys choral singing and various folklore ensembles. To this day, the tradition is still alive in Lithuania, relating to the conduct of the national singing festival (it is held 1 time in 5 years). In recent years become increasingly popular folk festival Skamba (it takes place every year in the last week of May).

As for the wedding traditions, specialattention should be comic penalty ( "hanging") matchmaker-pimp. Before sending it to the "penalty", it stain the face with soot and allow all present to kiss women, regardless of their age. At the end of the ceremony, the bride must save the matchmaker agreed with the "butchers" (instead hang stuffed). Lithuanian wedding accompanied by dancing, in which the bride and groom are actively involved.

If you decide to visit Lithuania, you should be aware of certain rules of conduct that apply in this country: