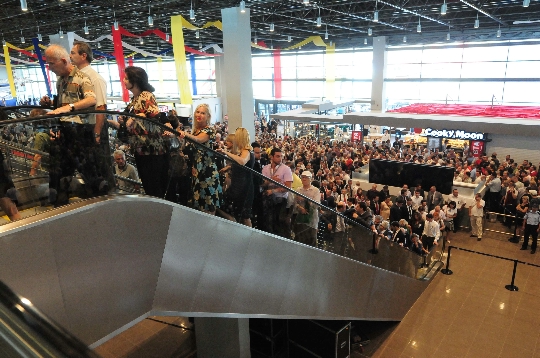 Macedonia is just beginning to unwind as thetourist destination in the Balkans, and because of regular direct flights from Russia to Skopje is no schedule of any airline. But the charter of the Moscow weekly landing at the airport of Macedonia on the shores of Lake Ohrid. Travel time - about three hours, and will take a little longer path with a change in Belgrade. There "Aeroflot" sent their planes on a regular basis.

The right to take international flights have two airport Macedonia - Ohrid and Metropolitan:

The first flights the airport Alexander the Great took in 1989 in Belgrade, then the capital of the former Yugoslavia. Then, at the airfield in Skopje began to emerge aircraft from Athens, Thessaloniki and Vienna.
scandal emerged in 2006 with Greece overrename the airport. Name of Alexander the Great both nations believe their own historical heritage, but because the Greeks protested that the Macedonians named their air harbor name of the great king and military leader.
"Vzletka" airport has a length of 3 km and can take heavy aircraft. The main airlines represented in the schedule Skopje airport today are:

Charter and seasonal flights to Skopje is connected to Düsseldorf, Zurich, Antalya and Split.
Details on the website - www.airports.com.mk.

Rest on the lakes

Macedonian lake of natural landmarkOrchid - a popular holiday destination and locals and foreign tourists. Last reconstruction of its runway was carried out in 2004, and now works on modernization of the passenger terminal and increase its capacity continues.
Main flight direction of this air harbor - Amsterdam, Zurich, Brussels, Basel, London and Moscow.
All flights and infrastructure features on the site - ohd.airports.com.mk.

Flag of Europe: photo, history, the value of the state flowers ...

Nepal Capital: card photo. What is the capital city in ...