Home>Articles about Malaysia>Malaysia Flag photo, history, the value of the state flag colors of Malaysia

Malaysia Flag photo, history, the value of the state flag colors of Malaysia

Articles about Malaysia
by Kristian 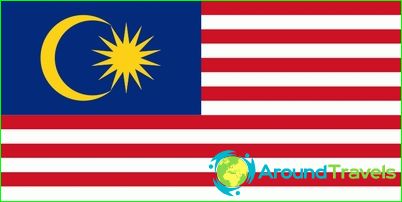 Approved officially in 1963, the state flag of Malaysia is called in his homeland "Nice striped." It emphasizes the sovereignty of the country, along with the Malaysian anthem and coat of arms.

Description and proportions of the flag of Malaysia

Malaysian flag rectangular panel hasthe part proportional to each other as 2: 1. Main Flag field consists of horizontal stripes of red and white colors of equal width. In total, fourteen bands, the uppermost of them - red, and the bottom - white. The bands represent the 13 states that are part of the country, and the government of the state.
The upper part of the cloth, closest to the shaft, which is equal tothe width of eight lanes, contains Kryzhi dark blue color, which is applied in the field chetyrnadtsatiluchevaya star and crescent, covering her left. The star and its rays remind Malaysians of the unity of the federal government with the country's 13 states and the Islamic crescent is a symbol. Most people in Malaysia - Muslims.
Red, blue and white colors of the flag - a tribute to the friendly relations with the United Kingdom and a reminder of the past of the state, the former colony of the United Kingdom.

Creating a Malaysian flag began in 1949,when he was declared a federal competition for the best project of the state symbol. The victory it won architect Johor Mohammed bin Hamza, who worked at that time in the country's government. The basis of the flag was taken banner taken to mounting on the stern of all vessels of the British East India Company. It Kryzhi on the background of a striped red-and-white cloth was placed flag of Great Britain.
Flag project was approved by George VI, andflag was first raised over the governor's palace in Kuala Lumpur in 1950. While the number of lanes and the rays of the star was less than in the modern version. They became fourteen in 1963, when the Federation of Malaya had included in its composition are still some areas. Then, and it has been approved the final version of the state flag of Malaysia.
The proper name "Nice striped"The cloth was given in 1997, when the celebration of the anniversary of its independence, Prime Minister officially announced that the Malaysian public symbol name appeared.
Navy Malaysian flag contains an imageState Kryzhi in the top of the hoist. The rest of the field of the flag of the Navy of the country - white, coated with a right to the bottom of the anchor in blue with two crossed swords.