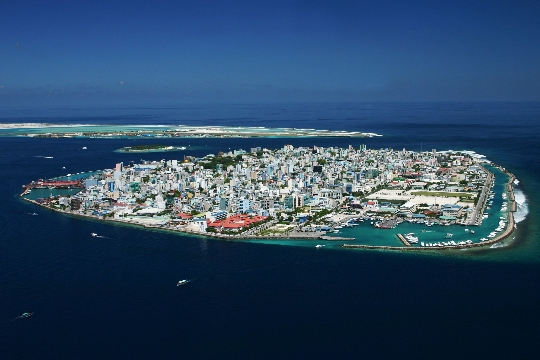 Maldives for many touristspresented a luxurious paradise. Arriving here, guests are surprised that Male, the capital of Maldives, is very small. Indeed, its area does not exceed two square kilometers, while it holds about a third of the country's population. But on the other hand, the main city of the state occupies almost the entire island, which has the same name as the capital.

It is surprising the tourists and the difference between the idyllic island, endless white sand beaches and busy rhythm of the modern metropolis, skyscrapers, highways.

Shops and shopping in Malé

After relaxing on the exotic Maldivesremain beautiful photo memory, local souvenirs - visual reminders about the rest. The most popular gift to the resort for men - is Maldivian mats and thumbnail images of local boats. Women, of course, the dream of a unique and pleasant souvenirs, unfortunately, most of them - in the list of goods prohibited to be exported from the island: the product of tortoiseshell; unusual black corals; their "colleagues", red corals; shell pearl oysters.

But it is possible to export fish and seafood - in Male is a special fish market, where a wide range of dried, dried and canned seafood.

Arriving in the capital, it is possible to form differentsightseeing tours, which include familiarity with religious shrines or architectural masterpieces of the past. Most Male population professes Islam, but because the most beautiful buildings in the city - a mosque. You can go, for example, to the mosque on Good Friday, which is also the Islamic center on the islands, or the Old Mosque Friday to admire its beautiful minaret, venerate the tombs of national heroes. Among the religious symbols of the non-Muslim world - the head of the Buddha, who arrived here with Todd island.

In 1913 he appeared in Male Muliage Palace andToday, a century later, it is as beautiful and pyshen, because there is often pictured guests. Another place in the capital of the Maldives is for rest and admiring - it Jumhury-Maidan, cozy shady park. In another park called Sultans Park, the National Museum is located in Maldives. Visitors can see the artifacts collected by Thor Heyerdahl, the famous explorer, during an expedition to the islands.

The beaches of the Algarve: photos, videos. The best sandy beaches ...