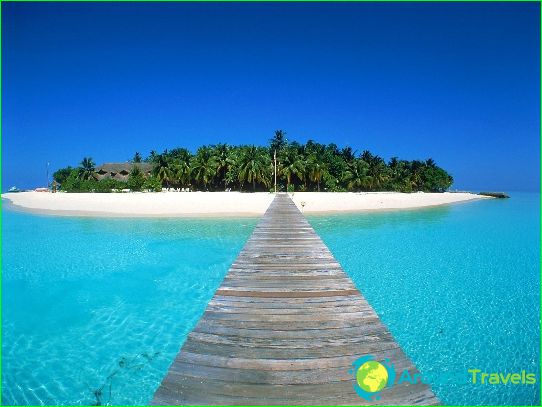 Maldives - a state in 20atoll located south of India. Maldives washed equatorial Indian Ocean. They are 700 km away from Sri Lanka. The structure of the atoll consists of more than 1,190 coral islands, the height of which is negligible. The highest point - 2.4 m, located on Addu Atoll.

The total area of ​​the Maldives is 90 thousandsq. km. The land occupies only 298 square meters. km. The only town and port of the country is the city of Male, which occupies the eponymous atoll. The population of the Republic of Maldives is represented by Africans, and Arabs Maldivians. People live in 201 island. Tourist resorts are 88 islands. Local residents are engaged in servicing tourists and fishing. Farming on the islands very weak. Food come here from other countries. Local crops include coconut, banana, sweet potato, fruit, breadfruit, and some vegetables.

Many centuries ago, in the area of ​​the Maldiveswere volcanoes. In their place are formed coral reefs, which turned into the island. Maldives gained popularity thanks to its wonderful beaches covered with white sand. Islands are the differences in the topography and the natural world. Among them there are areas of land, the surface of which consists of sand. Some of the islands are covered with tropical vegetation.

The Maldives are located in the area of ​​influencesubequatorial monsoon climate. The dry season is formed from November to early spring, as in this period is dominated by the northeastern monsoon. The rainy season lasts all summer due to the action of the southwest monsoon. a whole year on the islands there is hot weather. The air temperature here is never below 17 degrees in January. Average temperature indicators: from +24 to +30 degrees.

Nature on the islands

Maldives differ rich fauna and flora. There are not found harmful to human, animal or poisonous snakes. There are no dogs, as under local laws contain them is prohibited. The islands are found turtles, flying fox, and others. Among the birds there are terns, gulls, marine frigates, pink parrots.

How to get to the Maldives

Most of the tourists arrive in the country onplanes. The airport is situated on Hulhule Island, remote from the capital, 2 km. It is the only airport in the world with the runway, the beginning and end of which are located in the ocean. After the arrival of the tourists go on their way to the islands, using boats and seaplanes.