Articles about Marshall Islands
by aroundtravels 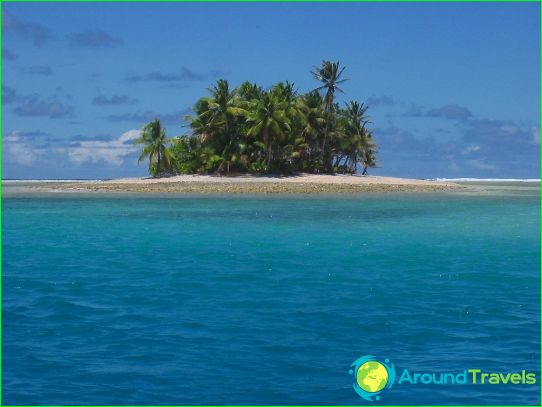 The most interesting of the Pacific countriesIt refers Republic of the Marshall Islands. It is located in Micronesia, and is a group of islands and atolls. The total land area occupied by that State, equal to 181.3 square meters. km. Lagoon covers more than 11 673 square meters. km. Marshall Islands are divided into two strands: Ralik and Ratak. They are spaced apart by 250 km. The most important islands of the country are considered to Majuro and Kwajalein. The latter is an atoll with the largest lagoon in the world. Its area is 2174 square meters. km. The capital of the state is the city of Majuro.

Marshall Islands were named for CaptainJohn Marshall. The archipelago is characterized by low-lying terrain. The islands are sandy beaches, interspersed with coral patches. Most of the archipelago of land occupied by plantations of coconut palms and mangroves. Coral islands differ infertile soils, so agriculture is developed here is not very good.

Marshall Islands were located in the tropical zoneClimate. The weather there is hot and humid. The climatic conditions of the north-south change. Northern Islands differ tropical semi-arid climate. The northernmost atoll Bokak - it is almost semi-desert. As we move to the south increased rainfall in the islands. Maximum precipitation falls in Ebon Atoll, which is the southernmost. Marshall Islands lie in the north-east trade winds. Therefore, almost all year round there are winds from the northeast, which bring with them moisture. Virtually all the island vulnerable to heavy rains. There happen to tropical storms and typhoons. Strong winds destroy homes and break the trees. At this time in the ocean there are high waves, threatening low-lying islands. Droughts in the Marshall Islands also occur.

Features of the natural world

Marshall Islands is a growing placetropical plants. The forests are preserved only on the uninhabited islands. In other places nature has changed due to human activities. The local flora was almost destroyed, but instead people plantations planted breadfruit, banana and coconut palms. In the middle of the last century, the US government conducted on some islands of the nuclear tests. The first hydrogen bomb exploded near the Bikini Atoll. On the neighboring island fell fallout, which have caused irreparable harm to the ecosystem. Currently, the main representatives of the fauna of the islands are sea birds and turtles. In coastal waters there are a lot of fish and coral. In the Marshall Islands there are no protected areas and nature reserves.

Holidays in Switzerland in May: prices and ...