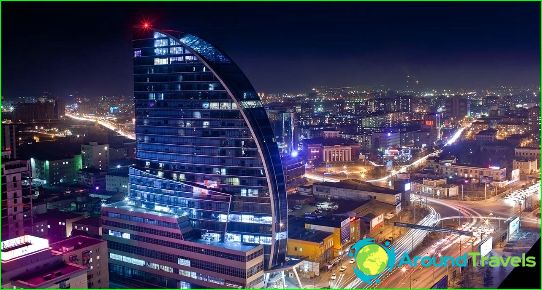 The capital of Mongolia, Ulaanbaatar, is not just athe administrative center of the country, but also its most populous city. Almost half of all Mongolians living here. The appearance of the capital is somewhat unusual. Here you will find modern and high-rise buildings, including the lost Buddhist monasteries, and traditional Mongolian yurt, located around the perimeter of the city.

It is the largest Buddhist temple in the capital ofall existing. It was built in the 19th century, approximately in the middle. And by the beginning of the 20th century took on the role of the principal place of worship the Buddha throughout Mongolia. He was then closed and the "second birth" occurred in 1944, as the people of the country in dire need of a place of pilgrimage. Temple takes pilgrims to this day.

The monument to Genghis Khan

The monument is visible from all parts of the city and isthe country's main tourist attraction. Open monument depicting Genghis Khan on horseback, was in 2008. Today it is the largest equestrian monument. Overall height, given the pedestal, is 50-meters. Here you can not only appreciate his dedication progenitor of the Mongols, but also to look into the museum and art gallery, which is located at the base of the monument. But the monument itself is quite interesting. The fact that a horse's eyes are also a viewing platform from which you can admire the views of the capital.

The main square of the capital, named after Sukhbaatar - a man who led a popular revolution. The central part of the square is decorated with a monument dedicated to the freedom fighter.

The composition is quite unusual. Sukhbaatar seated on a horse in the desert surrounded by lions, stretched out his hand forward. He also continues his run their fiery speeches, a fragment of one of which is engraved on the base of the monument.

One of the gems of historical Mongolia. Construction had the line 19 - 20 centuries. Now here is a historical museum.
Initially the palace was intended bogdyhanu Bogd Gegen VIII - the last ruling monarch.

Museum presented summer and winter palace. For the construction of the summer residence of the Chinese style was chosen. He dated it 1893 - 1903 years. Only the winter palace was built after the end of its construction.

The museum collection consists of more than eightthousand exhibits. Here you can see the portraits of the rulers of the country, as well as a variety of sculptures. Recreated palace interiors help make an excursion into the distant past.

Be sure to look at the market square -the largest in the entire country. Naran-tul enjoyed great success with shoppers. It attracts people from all parts of the country, to destroy their egg capsules. Guests of the capital is also not lagging behind the indigenous population in the desire to lighten their wallet. Here you will find everything and at reasonable prices. It is in Naran-tul you will find excellent cashmere, which is famous for Mongolia. But in addition to a huge selection of products, there are many pickpockets trades. So be careful!

Demographics of Monaco. The number of the Monaco population: features, density, ...