Home>Articles about Mongolia>Flag of Mongolia: photo, history, the value of the state flag colors of Mongolia

Flag of Mongolia: photo, history, the value of the state flag colors of Mongolia 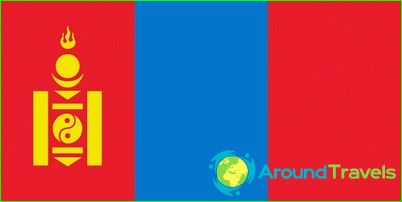 State flag of Mongolia officially approved in 1992. The national symbol has become an essential attribute of statehood, along with the national anthem and its coat of arms.

Description and proportions of the flag of Mongolia

Mongolia flag is a rectangle whose lengthIt refers to the width in the proportion of 3: 2. there are three colors on the flag of Mongolia - red, blue and yellow. flag field is divided vertically into three equal parts. Adjacent to the shaft and the outer parts are in red, while the average - dark blue. On a red field is applied near the staff state symbol of the country, called soyombo symbol.
This logo was popularized in the country in the XVII century and is perceived since the main symbol of the unity of the Mongolian people.
The upper part of soyombo symbol - a sign of fire, indicatingMongolia and the revival of the peoples of the dawn. Three flames language - is the past, present and future are inextricably linked history of the Mongolian state. Below are inscribed the moon and sun, reminiscent of eternity and light. At the heart of marked fish, never sleeps and employees symbol of vigilance and caution.
Triangles soyombo symbol - is fighting charactersMongolian soldiers, warning of external and internal enemies of their valor. Vertical rectangles resemble fortifications and tell about the famous Mongolian wisdom about the power of friendship.
Gold, which is applied to the emblem, is treated in Mongolia as a symbol of permanence and immutability, and the whole soyombo symbol represents the country's inhabitants desire for freedom and independence.
The red color of the flag of Mongolia underlines the importance ofthe victory of the national liberation revolution and symbolizes the hot flame fires Mongolian steppe. The blue field - a tribute to the Mongolian cloudless sky, under which hundreds of generations have grown brave warriors and peaceful pastoralists.

The history of the flag of Mongolia

The first victory of the revolution after the flag of Mongoliait was a red flag with the moon and the sun depicted on it. These celestial bodies are symbols for the Mongols heavenly parents. Then there was the emblem of the flag field soyombo symbol, executed in blue. It rests on a pedestal of lotus flowers, thus emphasizing the unshakable foundation of Buddhism in the country.
Then, over the symbol on the flag has risen five-pointed star, and interpreted as a sign of victorious socialism, and as the guiding Polar, always guarding pilgrims and travelers.

Education in Sweden. Study in Sweden - ...