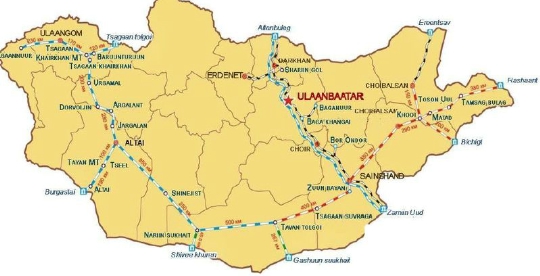 Railways Mongolia belongRussian-Mongolian JSC "Ulan-Bator Railway". The share w / d transport accounts for almost 80% of freight and 30% of passenger traffic in the country. The volume of traffic is significantly reduced as a result of changes in 1990 Previously, the railway system of the country was part of the USSR railways. Railway in Mongolia - is one of the main economic sectors. From its functioning depends on the state of the economy as a whole. The state takes a large area and has a small population. Therefore, rail service is poorly developed. In the country there is only one line for passengers - from north to south. As it runs well and train Moscow - Beijing.

The performance of the railwaythe system has been increased since 2005, when there was a change of operation technologies. F / g network of the country is formed by two lines, which are not linked. The largest Mongolian railway is Transmongolian connecting cities such as Ulaanbaatar, Sukhbaatar, zamyn-üüd. This road has an average length of 1108 km and several branches. The second way Solovevsk departs from the station and stretches to Bayantümen.

In Mongolia and operates international routeUlaanbaatar - Beijing, which runs luxury train. Currently, Mongolia is developing a northern corridor - the road between China and Europe as well as Russia. This project was approved in 2014. It includes such areas as the development of transit transportation through Mongolia, increased capacity of the railway.

The main and the largest railway station of the country israilway station of the capital - Ulaanbaatar. There is a center of international and regional w / d messages. This station is spread in the eastern part of the city, on the Trans-Mongolian Railway. View the schedule of trains and book tickets on the official resource of the Ulan Bator Railway (UBZhD) - www.ubtz.mn.

Trains in Mongolia moved slowly. For transportation of passengers used badly worn compositions. In other countries such trains has long been withdrawn from circulation. tickets at low prices. For example, the drive from Ulaanbaatar to the border in the reserved seat can be $ 9. Travelers are offered a place in the general cars. Recently, the operation was introduced high-speed train, which runs through Ulaanbaatar - Darkhan. A ticket for a reserved seat train is more expensive. After computerization of sale system w / tickets, you can buy a ticket at any station ticket office.

How to fly from Khanty-Mansiysk to Moscow? Time ...

The coast of North America: a photo, a description of