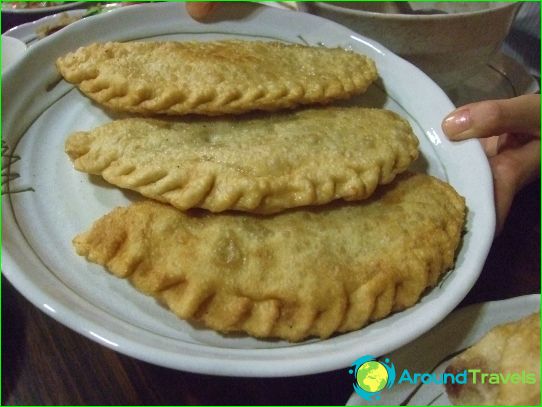 On the Mongolian cuisine has had a great influencecattle, which since ancient times involved the peoples inhabiting the country. Therefore, Mongolia dishes, mostly made on the basis of meat and milk. In this respect, the inhabitants of the diet is quite varied. They use all kinds of meat products. Mongolian cuisine offers a wide choice of meats. The food is beef, lamb, horsemeat, goat meat sarlyks (yaki) and others.

To keep the nutrients in the product, itdo not lead to the condition, that is, leave the meat raw. The diet of Mongolians traditionally a lot of soups. They almost do not eat fried foods. This feature has developed historically. At the steppes fry just not on anything. Therefore, all the dishes are made steamed or boiled. Most often, smoked meat and vyalili. Another interesting way of cooking: narrow strips of meat placed under the saddle. They prosalivalis the evening, while they ate.
National dish is characteristic of the Mongols hoch -lamb on a traditional recipe. This dish is usually prepared on holidays for guests, as its preparation process is long and laborious. Among the local population popular dishes unsalted boiled mutton. She was replaced by beef, horse meat, camel, saiga meat and others. Very often, the meat simply dried in the wind, cut it into thin strips. At the same time the meat is pre-processing. Meat dishes Mongolia eaten without condiments and garnishes. However, they are preparing for a long time, as the dried meat, or cook large portions.

The tradition of the Mongolian cuisine

The population is widespreadmilk of different species. They use goat, cow, mare, yache and camel milk. However, the pure product is rarely used. Usually, it is subjected to fermentation to give the traditional dishes:. Tarak, bislag, Arul, mare's milk and other milk treated with complex and long. The Mongols sometimes mix milk from different animals.
Mongolian cuisine has many originalrecipes. For example, Bodog - baked goat meat in the stomach, bortsok - dough, fried in animal fat. In addition to milk the people employed wheat groats and rice, garlic, root vegetables, cabbage and onions. Vegetables do not eat raw, they are boiled and steamed. Bread is almost absent in the menu of local residents. At the same time they use a variety of bread products based on wheat flour. Many dishes are complemented Mongolia cakes baked in a pan.
Tasty According to Mongolian dish is foam. To prepare them, milk long simmered. Then it cooled and removed a thick layer foams. They are spread on a dish, dried and consumed with tea.

Holidays in Switzerland in August: prices and ...