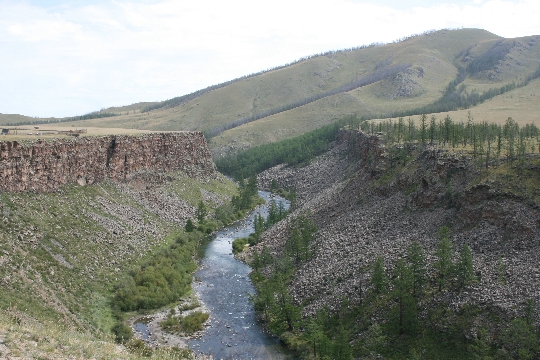 Mongolia's rivers originate in the mountains. And most of them is the headwaters of the major rivers of Siberia and the Far East.

The bed of the river passes through the territory of Buryatia(Russia) and Mongolia. Zheltura Jida is a right tributary of the river. The source of the river is located on the lands of Mongolia. The total length of the river - 202 km and almost all of them are op the country. Russia accounts for a total of 18 kilometers of the river.

The bulk of the river water gets during the rains. Flood is in the summer, when a large amount of precipitation in Mongolia. At the mouth of the river and found the village Zheltura Tengerek (Buryatia). The waters of the river are actively used, acting as a source of drinking water.

The locals call the river Minzhiyn Gol. Geographically, the channel passes through Mongolia and Russia, as a left tributary of the river Chikoy. Its source Menza takes on a ridge Baga Hentay (Mongolia). Coming down from the mountains, passes through the territory of Trans-Baikal Territory and again returned to Mongolia. The total length of the river - 337 km.

River covered with ice about the secondhalf of November. Opening of the ice from the end of April. The total duration of the freeze-up from 145 to 180 days. In winter, the river freezes to 130 centimeters. In the river live: flax, trout, perch, burbot, grayling and catfish.

The riverbed is completely passes through the territory of Mongolia and has a length of 1124 kilometers. Orkhon - Mongolia's second-longest river.

The source of the river is located in the Khangai Mountains. The upper reaches of the river are the narrow, resembling a canyon valley. Upper Orkhon form rather high (20 meters) and wide (10 meter) waterfall. The average flow of the river passes through the deep winding valley, and only when you exit the mountains river widens to 150 meters. Orkhon is covered with ice from November to April.

In the valley of the river are many interesting places to visit: Ordu-Baliq - an ancient city, which was the capital of the Uighur State; Karakorum - the main town of the Mongol Empire. In addition, several Hun graves, tombs have been found in the river valley.

The river passes through the territory of Mongolia. Its total length - 475 kilometers. The source of the river - the water of Lake Hovsgol. Then slowly Eg River carries its waters to the distant Selenga. Since about October until the end of April the river is covered with ice and it becomes an attractive destination for lovers of winter fishing. It is home - grayling, goldilocks, taimen. In its middle reaches of the river is divided into many branches.

Bus tours to Romania. The cost of bus tours ...