Articles about Montenegro
by Klaid 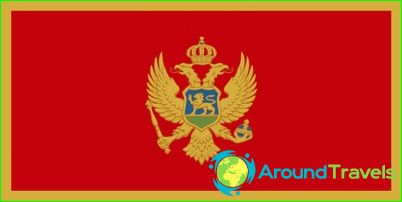 One of the state symbols of the country, the flag of Montenegro, together with the anthem and the coat of arms was approved after the formation of a sovereign state.

Description and proportions of the flag of Montenegro

Rectangular flag Montenegro flag haslength to width ratio of 3: 1. His field is made red, the entire perimeter is a gold rim. In the center of Montenegro's flag country coat is applied.
The coat of arms is the official symbolwhich adopted the Montenegro Assembly in 2004. Golden two-headed eagle on the coat of arms emblem repeats kolevskoy family Petrovic dynasty and symbolizes the relationship of church and state in the country. On the breast of the eagle is the heraldic shield with a golden lion on a blue field. Crowned coat of arms crown royal dynasty. This fact has caused some controversy in the community, as a modern Montenegro is a republic.
Supporters of the union with Serbia, Montenegro, oftenInformal used flag that represents a tricolor with equal width horizontal stripes of red, blue and white. On the flag field at an equal distance from the edge of the coat of arms in the form of a two-headed eagle in the royal crown with heraldic shield. This flag is adopted by those who opposed Kosovo's secession from Serbia and Montenegro agreed with access from Interstate union with Serbia.

The history of the flag of Montenegro

Until 1918, the flag of Montenegro looks like a classic red-white-blue tricolor, which was located in the center of the national emblem.
During the German occupation of the country in Montenegro army used military flag adopted until 1918, on a red field, which depicts an eagle and a lion.
Socialist Montenegro as a part of Yugoslavia again received as an official symbol of the tricolor, which caught fire on the red five-pointed star.
At independence, Montenegro has chosenas a flag in 1993 tricolor with red, blue and white horizontal stripes. Then the policy of separation of Montenegro from Yugoslavia led to the fact that the leader of the country Djukanovic decided to change and official paraphernalia. Old flag served as a reminder of the union with Serbia, and therefore approved a new in 2004.
Red cloth with a gold border around the edges ofclosely follows the military flag of the Army of Montenegro, which existed until 1918 and served as the official state symbol of the Republic during the years of Nazi occupation.

What to buy in Madrid. What to bring out ...