Articles about Montenegro
by Anna 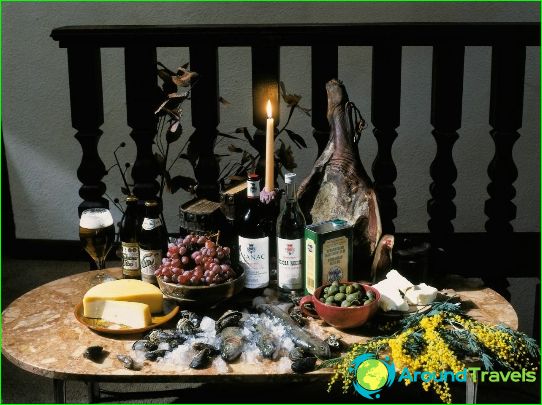 Montenegrin cuisine has absorbed a culinarytraditions of different countries. It was influenced by the Slavs, Turks, Germans, Hungarians. Many Montenegrin dishes are borrowed from other peoples. For example, pizza, lasagna and spaghetti.

Features of the national table

dominated by cooking meals in this country,prepared with meat and vegetables. They are characterized by simple recipes and great taste. They are imbued with the scent of fragrant spices. Meat dishes are often made of Montenegro on the coals, and with kajmak (specifically sour milk). The main product of the meat on the table stands. Montenegrins use pork, mutton, goat meat.
Traditional meat dishes include porkchops, homemade sausage, grilled on a skewer meat, kebabs, dried lamb stew with rice and vegetables, cold cuts, etc. Famous Montenegrin meal is ham. This sun-dried beef or pork ham that is cut into thin slices. It is used as a snack or as an add-on product to the main dishes. Leg has a specific and very pleasant taste. In addition, it can be stored for a long time.
Meat necessarily consumed with vegetables. Popularity has fries, corn and wheat bread.
For Montenegrin cuisine is characterized by the use ofcheese in large quantities. The best cheeses are considered to Zlatibor, kachamak, kachkavali, Lipsky and others. The food everywhere is used cheese made from sheep's or cow's milk. Montenegrins eat lots of different kinds of bread, which symbolizes prosperity and harvest. On the home table white bread will certainly present. From dishes with meat and vegetables stand out stuffed, sarma, pasul, stuffed peppers, moussaka with eggplant, tomato and meat, red pickled peppers, goulash with beans, etc. In Montenegro prepare ciorba -. Thick soup with chicken or fish. Eating seafood is also very popular. Cooks countries do Dalmatian stew with fish, Ribble chorba, trout with prunes, risotto with seafood, and others.

Flour products in the country is also very fond of. Cooks offer pies with cheese, cottage cheese or meat. Burek or record a layer cake made with yoghurt. They serve pizza, donuts, poet with a variety of fillings. For dessert served pancakes, sweet cakes, turkish delight, nuts in honey, rolls with poppy and jam. Addition to good food is local wine. Montenegrin dry wine is very popular. The best among them are considered "Krstac" and "Vranac". Lovers of strong drinks consume moonshine fruit - brandy. Connoisseurs of beer with pleasure drink local beer.

The suburbs of Madrid - photos, what to see