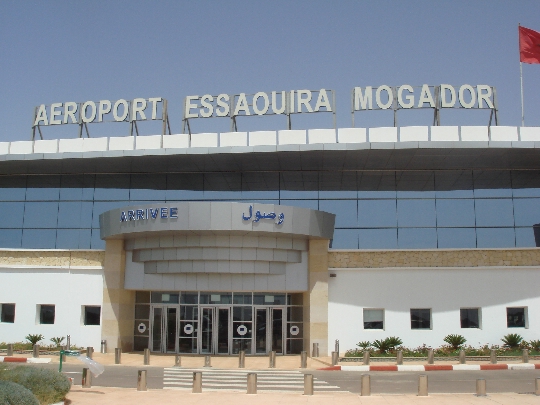 Moroccan exotic long become accustomed toRussian traveler, and, increasingly, in the narrow streets of Fez or Marrakech heard native speech, and the beaches of Agadir is already quite possible to meet colleagues or neighbors house. In Morocco airports and fly regular flights and charters, but because of delivery problems at the domestic tourists there.
Several times a week in Casablanca landsaboard airline Royal Air Maroc from Moscow, and in the resort of Agadir in the summer and autumn fly charters. In addition, the services of Russian tourists - the wings of the Europeans and the flight with a connection in Paris or Amsterdam takes 8 hours, depending on the length of the transplant.

The international airports of Morocco

Flights from abroad take another four airports, in addition to the capital in Rabat:

The international airport of Morocco in Rabat and himselfcity ​​shared by only 8 km, and its new terminal was opened in 2012. Awaiting departure, passengers can enjoy the Maghreb cuisine in the restaurant and buy souvenirs for friends in duty free shops. In the arrivals area equipped with currency exchange and car rental.
The airport of Rabat can be reached by taxi15 euros, and on the shuttle bus from the train station - five times less. The local bus stops near a supermarket five minutes walk from the passenger terminal, which is not very convenient for passengers with luggage.

By the skyscrapers of Casablanca

This metropolis of Morocco is connected with the world of airharbor them. Mohammed V. These planes fly from Paris, Madrid, Cologne, Istanbul, Barcelona, ​​Lisbon, Amsterdam, Cairo and several dozen cities. Transatlantic flights make board Air Canada Rouge, and visits to Moscow - airplanes Royal Air Maroc.
Transfer to Casablanca is possible by taxi, bus or by reservation at the hotel, which is selected traveler to stop.

Germany Cuisine: photos, dishes and recipes of the national ...