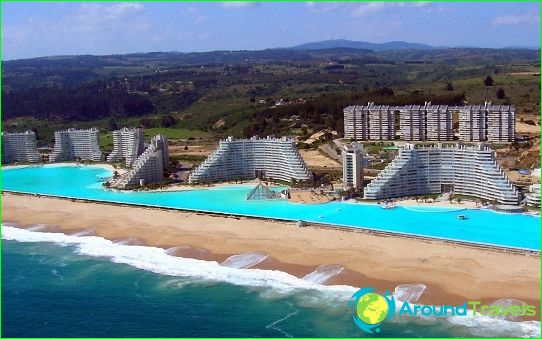 African town with typical Spanish name- Casablanca - the largest city of Morocco, is the business and financial capital of the country. As a seaport, Casablanca has become the largest city in the whole of Africa state. Although the modern capital of the country - the city of Rabat, Morocco symbol still believe Casablanca. Despite all the relations with other countries of the world, this city on the coast perfectly preserved its national character. Lodges, mostly with flat roofs, and towering over them a mosque impressive size, which at certain times open entrance for tourists. In principle, the Muslim visitor has the right to go to a religious building and pray there is not only "travel" time.

In this city will feel comfortablethose who speak bad French, because the local population owns a greater or lesser extent. English-speaking population is very small. But most visitors Casablanca focused primarily not on the tour, and then, to indulge in a beach holiday.

Many beaches in the city are of artificial origin, and they are not inferior to the natural beaches. The best sandy beaches of Casablanca with clear water - is:

The main beach in Casablanca - Ain Diab is. It is close to the city center. Nevertheless, there occur high waves, which do not always give a good swim. Therefore, on the coast provides numerous swimming pools, and nearby - beach clubs. The pools you can swim with the children.

Bouznika is no longer in the city, andbetween Casablanca and Rabat. The city is also called Bouznika, and here every winter rush surfers and lovers of swimming in the waves. From Casablanca beach is spaced far enough - at 40 km.

Incredibly popular among touristsIt enjoys the beach town of Agadir, which is located in a closed bay. Moreover, it is protected by the surrounding hills. Here is good to engage in water sports - the usual swimming, surfing, water skiing. Staying in Agadir, easy to be deceived: it all looks as Europeans, even the clothes of passers-by, while you are in a Muslim country.

Cornish Beaches - elite. It does not find the budget travel. However, if you are a wealthy person, you can choose this option as holiday on the hotel's private beach is organized on the upper fork.

For those who love the sun and the hot summer, should visit Casablanca beaches, especially if European and Turkish beaches have become boring.

Where to go with children in Vitebsk. Entertainment ...