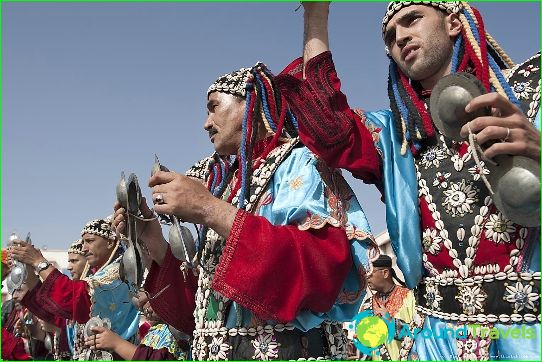 This country is one of the most unusual andambiguous in terms of geographical location, and because of the cultural and national peculiarities of the peoples inhabiting it. The formation of the culture and customs of Morocco affected indigenous tribes - nomadic Berber and especially the lives of those who have for centuries conquered these territories.
Located in Africa, but with an obvious biasthe Arab tradition, the state absorbs the Jewish and Roman, pagan and Christian features to be unique, unusual and very desirable for any traveler.

In the arms of the ancient medina

Medina called the old center of anyMoroccan city, surrounded by ramparts deaf. Inside the medina noisy life, as well as a few centuries ago. Here, selling fruit and spices, water carriers are ringing their bells, attracting customers, and in coffee shops serving tea with mint and aromatic coffee extraordinary fortress.
Moroccan women are painted with a djellabahood and wide sleeves. The feet have soft leather slippers, decorated with gold tinsel or silver necklaces. Men dressed easier, their coats are usually black or dark gray, and their heads covered with hats, fez, named after the Moroccan city of Fez.
It was in the arms of the Medina you can find the most authentic souvenirs or explore the best dishes of the national cuisine, which is also an important part of Moroccan culture.

Islam and its influence

The Arabs brought into the culture of Morocco, many of theirfeatures, chief among which was the religion. By adopting Islam, Morocco has become increasingly Muslim rather than a secular state, but because even in the architecture of the special features of Islamic traced. Walking through any Moroccan city, you can see dozens of magnificent mosques built in different periods of development of the state. Much of it has become a cultural monuments of world importance.

The most important profession that thrives in Moroccofor centuries - dressing and dyeing of leather and manufacture of various garments, furniture and gifts. Skin excrete, painted and then sent to the workshops where sew from her amazing beauty bags and sandals, slippers and belts. All items are decorated with embroideries and appliqués, silver and pieces of mirror.
Equally important in the culture of Morocco haswoodworking. Cabinetmaker famous Marrakech and Fez, the city where for centuries were made carved furniture, boxes and household items made of cedar, arborvitae and hazel.

Restaurants in Germany - the best restaurants and ...