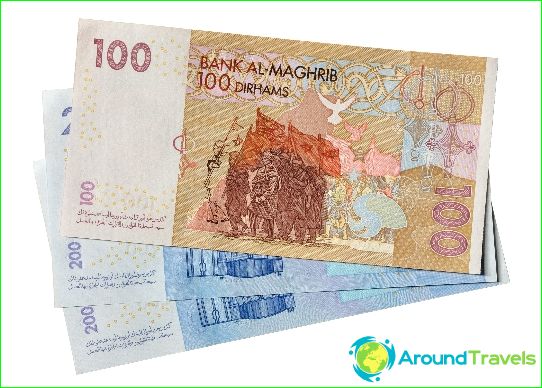 Getting information about the currency of Morocco - an importantpoint of preparation for the trip. The official currency is the African country - Moroccan dirham (100 centimes). Today in the active circulation banknotes in denominations of 10, 50, 100 and 200 dirham coins and 1 and 5 dirham, 5, 10, 20 and 50 centime. However, the dirham is not used throughout the Moroccan territory. In the southern regions and villages of the Atlas, in which the weak link with the progressive part of the country, is still in the course of the rial. This currency is equal to 1/20 of a centime.

Moroccan dirham was first put into circulation of money in 1960. It replaced the Moroccan franc.
Moroccan dirham - one of the most stable world currencies. Its rate is set by the state. He is one for the whole banking system.

What currency to take to Morocco

Buying Moroccan dirhams in the territoryother countries is not possible. The issue of importing foreign currency for Morocco closed. With regard to the import of foreign currency, you can import into Morocco without filling special documents - up to 1750 dollars. When you import the sum exceeding this mark, will fill in the declaration.
Removal of the national currency of Morocco is prohibited.

You can exchange virtually any foreign currency in the local can be banks, hotels, shopping malls, restaurants, specialized exchange offices, as well as at airports.
Currency exchange unlicensed exchange offices is strictly prohibited.
Note that the working week banks MoroccoIt starts on Monday and ending Friday. Working hours - from 8:30 am to 16:00 pm. Accordingly, the outputs are Saturday and Sunday. Bank Operation times vary depending on the internal policy of the bank.
Dirham is not convertible. To carry out the exchange of large sums of money in one go is not recommended.

Credit cards are accepted in most restaurants, hotels, shopping centers. Private traders prefer to work exclusively with cash.
In Morocco, you will find an ATM ATMs serving international payment systems, on the streets, in hotels and restaurants.
In Morocco, you can also cash travelers checks «American Express». They are willing to accept in hotels and entertainment establishments. Traveler's checks other systems almost cashed.