Home>Articles on Morocco>Flag of Morocco: photos, history, the value of the state flag colors of Morocco

Flag of Morocco: photos, history, the value of the state flag colors of Morocco 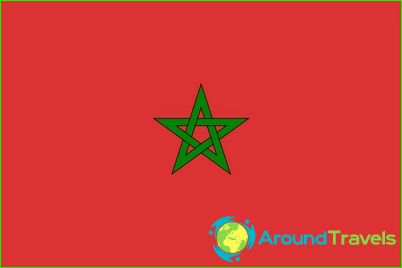 State symbol of the Kingdom of Morocco - its flag. Together with the emblem and anthem, the flag is a national treasure.

Description and proportions of the flag of Morocco

Rectangular flag Morocco flag hasdark red base color. On the single red field in the center of the flag is applied to a five-pointed star of the green, which is inscribed in a circle with a diameter of 19/45 width of the rectangle. The flag related to each other in the ratio 3: 2 length to width.
In addition to Morocco, the civil flag green star shows the four gold crown with stars on them, each in one corner of the cloth.
Traditional red Moroccan flag belongs to the Sherif of Mecca. This title is awarded sharifata leaders, who are considered the guardians of Mecca and Medina - the holy Islamic cities.
The five-pointed green star adorns the coat of armsMorocco, which is a shield with the rising sun against the blue sky over the Atlas Mountains. In the lower part of the shield and positioned pentagram green. Shield keep lions, standing on his hind legs, and at the bottom of the coat of arms on a golden ribbon inscribed with Arabic script motto. Royal coat of arms is crowned by a golden crown, and decorated with a pentagram and precious stones.

The history of the flag of Morocco

The oldest of the now well-known flag of Morocco wasred rectangle whose center is occupied square, lined with 64 white and black cells arranged in a checkerboard pattern. He was a symbol of the kingdom in the XI - XIII centuries. This flag was replaced by a red rectangle, which existed as the national flag until 1915.
Becoming a Spanish colony, the Kingdom of MoroccoIt received as a flag rectangular panel, the upper facing to the shaft of which was a white pentagram on a green field. This option is hovered over the flagpoles from 1937 to 1956.
Modern Kingdom of Morocco to honor its flagresidents and solemnly raised in Independence Day and other public holidays. Flags hung near the royal residence, they adorn not only the government buildings, but also non-governmental organizations.
Naval flag of Morocco reiterates the state with the only difference that has pentagonal cloth due to the recess on the opposite side of the shaft.

The streets of Amsterdam - photo, name. List of well-known ...

The population of China. Population in China: Features, ...