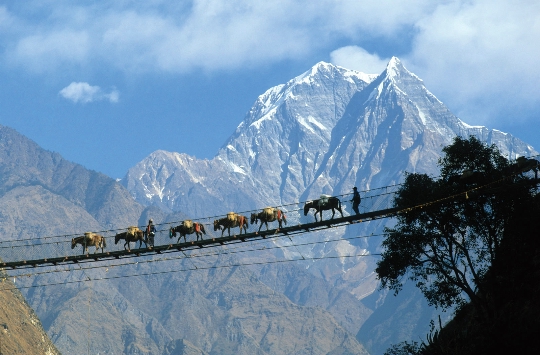 National characteristics are based on Nepalreligious norms and canons. The official religion of Nepal is considered to be Hinduism, but in fact a religion here - a combination of Hindu and Buddhist traditions, which have their own characteristics. Across the territory of Nepal are various monasteries and temples. Probably no one inhabitant of the country who has not spent at least a few hours in one of these religious institutions.

Residents of Nepal - are open and friendly, easy goon contact. They are always welcome. The fact that Nepal has been for many years in isolation from the other countries, has allowed him to keep intact many of the traditions that now play such an important role. Even the fact that the real invasion of tourists began in the late 20th century in Nepal, does not mean that something has changed in society. Etiquette locals to this day is considered to be very correct and harmonious.

You should know that in Nepal there are certain rules of communication that are made to perform even tourists.

In everyday life in the Nepalese are many rules that need to strictly follow. For example, after a person lying in any case can not step over.

Other people can not show the soles of their shoes. In no case do not touch the feet of a stranger and do not point to objects by means of their feet. This is a very offend Nepalese citizen.

Before the child's head can touch only the parents or priests. By the way, it is best to do not to touch someone else's body. Even innocent handshake can sometimes offend Nepalese.

Comply with the rules of the country in which departs, you can become her guests who are happy to be here to welcome all the locals!

Holidays in Latvia in July: the prices and ...