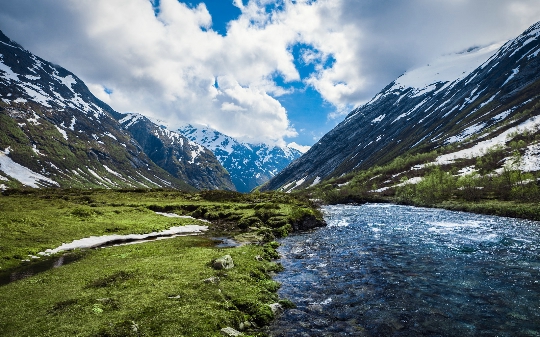 Scandinavian countries, although they have a common name,yet quite different from each other. And it is immediately noted by tourists. National characteristics are completely different in Norway than in neighboring Sweden or in the more distant Denmark, the alliance which lasted about 400 years (and after the Swedes 100 years).

Despite many years of alliances with neighboringPowers Norwegians insanely happy when in 1905 the country finally gained independence. In addition, it has received its own flag, which symbolizes the former friendship with the Kingdom of Denmark (Danish used the motif of the cross and the same color).

And the inhabitants of the Kingdom of Norway, one and all, are true patriots, and the national flag adorn the streets, squares and houses. It appears even on the holiday table.

Chief of the kingdom feast is celebrated on May 17It called modestly - Norway Day is celebrated but bright and wide. Tourists who choose to visit the country in May, will be lucky, because in this day all the people clothed in traditional costumes.

It would seem that in this small sizeState there is a single male and female national costume. But it is not so, every region has its own characteristics and fine details. Guests from other countries they are, of course, nothing will not tell, but the locals will point at a glance, in the north or south of the lives this or that person. And that's just looking at his suit.

It is understood that the Norwegian national costumesmen restrained and severe, but the beautiful half of the country is proud of rich embroidery that appears on blouses and vests. And in a suit uses a lot of silver pieces of this metal are made:

St. Hans Day, a national holiday,rooted deep in history. The Slavs will find in it a certain similarity with the holiday of Ivan Kupala. They are marked about the same time (end of June), held festivals, which are indispensable attributes of dancing and jumping over bonfires.

But St. Martin's Day is unique inSlavic calendar, this is the last before a long holiday of Advent. By tradition, the last day of cooking relies very hearty and rich table before Lent.

The trip to Poland