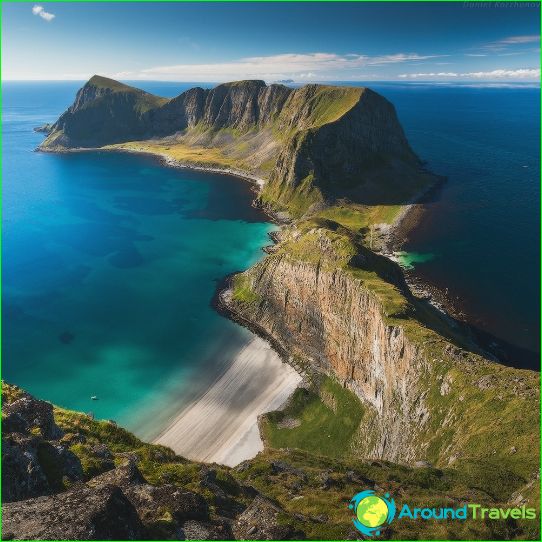 In Northern Europe, located KingdomNorway. It occupies the western portion of the Scandinavian Peninsula and the many small islands that are adjacent to it. Islands Norway are also in the Arctic Ocean (Bear, Jan Mayen). The country belongs to a large archipelago of Svalbard. Her overseas territory in the Atlantic Ocean is the island of Bouvet. Norway claim to Queen Maud Land and the island of Peter I - the Antarctic territory covered by the Convention, 1961 Total for this country belongs not less than 50 thousand islands of various sizes. The most famous and large considered an island of Senja, Lofoten Islands, an archipelago of Svalbard.

Over the Arctic Circle are Lofoten. The nature of those places characterized by unique beauty. The islands are located one behind the other chain, forming a barrier between the North Sea and the mainland. Near the eastern shores of the North Atlantic runs for that interacts with tidal waves and forms the most dangerous on the planet maelstrom - Maelstrom. The population of Lofoten is 24 thousand people. The climate is mild thanks to the Gulf Stream. This segment of the sea never freezes. Large tracts of land are considered Autsvagey archipelago, vestvågøy and Mosknesey. In between cruising ferries. The main city of the archipelago is considered to Svolvær.

Considering the island of Norway, special attentionshould be paid to Svalbard. It is located at a great distance from the Scandinavian peninsula, in the Norwegian Sea. This is a huge nature reserve, which has representatives of the northern fauna. They live walruses, polar bears, reindeer, seals, arctic foxes. Right whales are suitable to the shores, and on the rocks there are large bird colonies. Inhabited island is just west of Spitsbergen. It is home to about 3500 people, half of them have Russian roots. Svalbard annually receives at least 2,000 tourists, who are attracted to the sea rafting and dog sledding trips.

The second largest island of the country is considered to Senja, famed for stunning natural surroundings. On its territory Enderdalen National Park was created.

To the north of Lofoten Islands Vesterålen lie. Tourists go there to look at the seals. On the border of the Norwegian and Greenland Seas is Jan Mayen island of volcanic origin. He is an active volcano Berenberg. The nature of this land area is tundra, which is punctuated by occasional meadows.

For the country is characterized by not very harsh climate,despite its northern location. Many islands are in Norwegian maritime climate with mild winters. The reason for the relatively warm weather is the action of the Gulf Stream.

Nicaragua Flag photo, history, the value of the state flowers ...